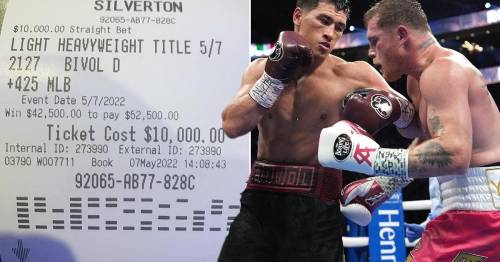 Alvarez made the switch up in weight to 175lbs where he challenged Russian star Bivol for his light-heavyweight world title at the T-Mobile Arena. But he was outclassed on the night by a sensational display from the champion who inflicted just the second career defeat on the Mexican star.

Mayweather had placed a winning bet on Bivol in the build-up to the fight and shared his winning slip on Instagram, with the caption: "Easy pick up." The boxing legend is the only other fighter to have defeated Alvarez, having done so in 2013 where he cruised to a points victory over the star who went on to become the pound-for-pound No.1

Alvarez was the betting favourite against Bivol having made the step up from super-middleweight having become the first man to be crowned undisputed four-belt champion at 168lbs last year. Alvarez previously ruled at 175lb when he stopped Sergey Kovalev in 2020 but fell short of repeating the trick against Bivol.

Bivol delivered a punch-perfect display to outpoint his rival despite the final winning margin deemed closer by the judges who scored the contest 115-113 in the undefeated champion's favour. Alvarez was on a 16-fight unbeaten streak prior to the defeat since his defeat by Mayweather.

He is now likely to chase a rematch with Bivol after the Mexican confirmed his plan to activate his rematch clause. Alvarez was set to face former two-time rival Gennady Golovkin if he could progress beyond Bivol but his defeat appears to have derailed the completion of their rivalry.

What did you make of Canelo Alvarez's performance against Dmitry Bivol? Let us know in the comments section below

The 31-year-old has admitted Bivol was the best fighter on the night but plans to regroup ahead of a potential second meeting. "I have to accept it, it's boxing. He's a great boxer and sometimes in boxing you lose," he said after the final bell. "I'm not going to give any excuses. He's a really good fighter, he comes in and goes out.

"I felt his power, it was a great fight and it was a good win for him. He goes in or out, he uses his distance well, I did enough to win, but that's the way it is. I want a rematch, it doesn't stay that way". Golovkin is now likely to have to wait his turn for a shot at the undisputed crown with the second meeting against Bivol likely to be scheduled for Mexico's Independence Day in September.

Any third fight with Golovkin could be staged in December when Alvarez had been considering staging a fight in the UK but those plans could also now be in jeapordy.

Previous : Secret tiny house hidden in tunnel under Liverpool ‘extremely dangerous’ to get inside
Next : Canelo Alvarez vs Dmitry Bivol scorecards show how close Mexican came to winning