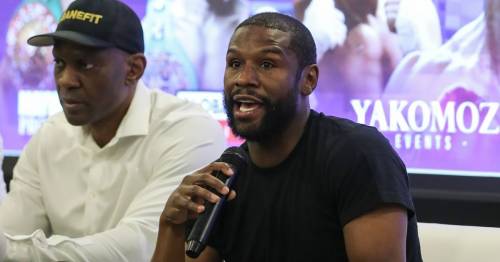 Floyd Mayweather has promised fans a "titan" performance against Don Moore in his latest exhibition fight that takes place in the Middle East this Saturday.

The boxing legend will return to the ring in his third 'boxing showcase' against former sparring partner Moore in Dubai. Mayweather has been out of action since last June when he fought YouTube star Logan Paul while cruising through the eight-round distance.

Mayweather believes all the fighters on the four-fight card will look to "put on a show" with the undefeated star relishing the idea of lacing up his gloves again. "It feels great to be in Dubai, I wanna say thank you to the whole UAE and everybody in Dubai and the fans," Mayweather said ahead of the fight. "This is such a beautiful event full of beautiful people, it is going to be a superb event with a great turnout.

"Every fighter up here will put on a hell of a show. It is going to be competitive and it will be an exciting event, we want everybody cheering and everybody enjoying it as this is what this brutal sport is about. The title of the event, Showcase in the sky but also Global Titans, we are 'Titans' and we are going to entertain you guys and put on a great show come Saturday."

The event will take place on a helipad atop the plush Burj Al Arab hotel in Dubai, with just 20 tickets sold to a limited crowd with fans needing to pay £150,000 to be present at the exclusive event. Mayweather fought Paul last June in an event which generated the legend an expected purse of $65 million after selling one million pay-per-views.

He is expected to earn another lucrative purse for his latest outing with the former 50-0 star even claiming he could earn up to nine-figures for the event. Mayweather has insisted he has worked hard in a full training camp for the event and has mirrored the practice he put in during his professional career.

Will you be watching Floyd Mayweather's latest boxing event? Let us know in the comments section below

"It was business as usual,” Mayweather said ahead of the event. “It always feels good to be in the ring and around familiar faces in the boxing gym. I’ve spent so much of my life in the gym, so I always feel comfortable getting back into it.

"Training for any fight, and even this exhibition, is something I am always going to do. No one ever saw me take a day off during my career. Why would I start now? I promise you’ve never seen a boxing event like this.