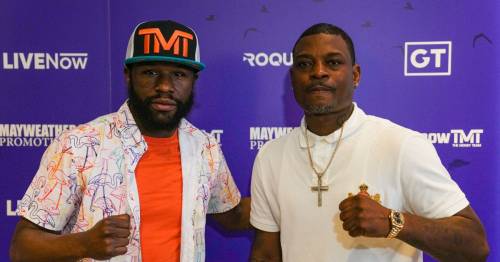 Floyd Mayweather will fight Don Moore this weekend in his latest mega-money exhibition exploit in Dubai.

The boxing legend retired in 2017 but will make his third exhibition appearance in the Middle East. Mayweather fought YouTube star Logan Paul last June in a successful exhibition which sold over one million pay-per-views.

He was set to face YouTuber Money Kicks earlier this year atop the helipad on the plush Burj Al Arab hotel but will now take on retired fighter Moore who was never defeated during his short career. This will be Mayweather's third exhibition having also defeated Japanese kickboxer Tenshin Nasukawa.

Here is all you need to know about Mayweather's latest exhibition…

Ring walks for the exhibition main event are expected to take place at around 10pm UK time with the full card beginning on the broadcast at 7pm.

UFC legend Anderson Silva will also feature on the bill hailed as the 'Global Titans Fight Series' with the length of undercard bouts set to determine the start time of the main bout.

How to watch via TV and live stream

The fight will be broadcast on FITE TV via LIVENow pay-per-view and their coverage will get underway from 7pm.

It will be available for fans to purchase at a price point of £12 via the FITE TV website here.

You can watch FITE TV on any device and through TV, mobile, tablet or laptop. The mobile app is supported on iOS and Android platforms, Apple TV, Android TV, ROKU, Amazon Fire TV and Huawei apps.

Will you watch Floyd Mayweather's latest exhibition? Let us know in the comments section below

Mayweather: “I am always trying to push the envelope and if something is brought to my attention that has a unique aspect to it, I am always interested,” said Mayweather.

“Having a fight on the helipad of the Burj Al Arab Hotel in Dubai and the opportunity to be the star of the show is going to be something I will remember always. People all over the world can buy the PPV and watch us fight high above, almost in the sky.”

Moore: “I am excited to participate in this event,” said Moore. “Because of how much of the same training I received from Roger Mayweather, I am gonna be able to give Floyd real problems. I have been training hard to show everyone what ‘Dangerous’ Don Moore is all about and expose Floyd’s weaknesses. This is my shot, The time is now, Floyd isn’t invincible. Anyone can be beaten.”