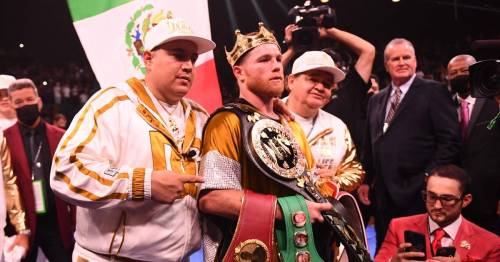 Floyd Mayweather disputes Canelo Alvarez’s claim to be pound-for-pound No.1

Alvarez recently stopped Caleb Plant in Las Vegas to become the first man in history to unify all four belts at 168lb.

Crawford displayed his own credentials shortly after when he stopped welterweight contender Shawn Porter in emphatic fashion.

And former undefeated star Mayweather would welcome the chance to work with Crawford if he is now entirely free from promoter Top Rank.

"The pound-for-pound top fighter right now is Terence Crawford," Mayweather told Fight Hype. "Everything about life is about time and patience.

"And Crawford I just truly believe that he doesn't have to be under my company for me to give him praise, I am not like that. If he is ever a free agent and he would like to go to any company I would love to work with him.

"Because I know what I can do to take him to that next level as he has a lot of raw talent and he is a hell of a fighter.

"There is a lot of great fighters out there but he is a mother******, and one thing I like about him he reminds me of a young Floyd Mayweather.

"He can fight his ass off and thats what I like about him, but he is a lot older than I was when he started getting praise because I fought for a world title when my career began blossoming."

Crawford earned more reviews after becoming the first fighter to secure a stoppage victory over Porter.

This sent his fellow American into retirement with his opponent later admitting that Crawford was a more difficult opposition than when he fought his rival Errol Spence.

The welterweight star will now look to set up a hotly-anticipated showdown with Spence who is currently recovering from an eye injury that prevented him from facing Manny Pacquiao.

Meanwhile Alvarez, who suffered his only professional defeat against Mayweather, is continuing his phenomenal level of activity having conquered all of the champions at 168lbs within a year.

Who is ranked as No.1 in your pound-for-pound rankings right now? Let us know your list in the c omments section below

He defeated Callum Smith and Billy Joe Saunders followed by his undisputed tilt with Plant, and is now eyeing a shock switch to cruiserweight.

Waiting for him at 200lbs is WBC champion Ilunga Makabu who has been sanctioned to take on Alvarez by the organisation at their latest convention.

He has been widely regarded as the pound-for-pound leading star having conquered four weight categories including light-heavyweight.

Although despite Eddie Hearn suggesting the Mexican could make a huge leap up to heavyweight, Alvarez himself has effectively ruled out any fight against Anthony Joshua or Tyson Fury.