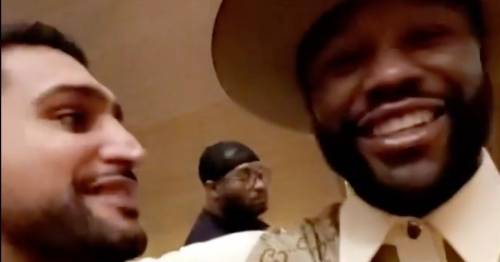 Floyd Mayweather has denied that he showed interest in an exhibition bout against old rival Amir Khan.

At one point, Mayweather vs Khan would have been one of boxing's biggest fights given the star power that is shared between both men. The American is considered arguably the greatest fighter of all time, while Khan was a multiple-time world champion who is easily one of the UK's most recognisable names in the sport.

But the pair were never able to make a meeting happen, and appeared to be friendly during a recent visit to Dubai where Mayweather was facing Don Moore in an exhibition. With both men now retired, Mayweather is still making mega money for his scoreless contests, while Khan is working on his next steps.

Khan claimed after their Dubai run-in that there was a possibility of the pair finally getting in the ring together for an exhibition. But while addressing rumours that he may bring Terrence Crawford to his Mayweather Promotions banner, the 50-0 legend used it as an example of a false report.

“It’s so many things that I can really talk about that I’m not going to talk about," Mayweather told reporters in Las Vegas of his interest in pound-for-pound great Crawford. "Just because, and I love ESPN, they have boxing writers and they are paying them, doesn’t mean they are right.

"When you see Fighthype post or you see a text message from me, and you see I say this is not true. This is no different than when Amir Khan was saying, ‘me and Floyd just talked about doing an exhibition.’ That wasn’t true.

"Amir Khan saw me in the lobby of the Armani Hotel in Dubai and he said get on my video with me and he was recording when I talked. Next thing you know he said, ‘Me and Mayweather talked about doing an exhibition’ which is not true."

Khan confirmed his retirement from the sport back in April after his February defeat to bitter rival Kell Brook. But within days he was eyeing up an exhibition with Mayweather, saying that the American implored him not to retire.

Would you like to see an exhibition fight between Amir Khan and Floyd Mayweather? Let us know your thoughts in the comments section below!

"Look, exhibitions always happen," Khan told talkSPORT in a story very different to the one Mayweather told. "I met Floyd the other day in Dubai and there was some excitement there, he was like 'don't retire, let's do something, there's something we can do'.

"I was like 'maybe if it didn't happen when we were both professional fighters, maybe it can happen as an exhibition'. No one wins, it's just a bit of fun to give the fans a bit of entertainment.

"I think now with boxing, it's totally changed now where a lot of these fights happen, social media guys fight each other, and a new door's been opened. People can just step in after a week of training and have a fight!"