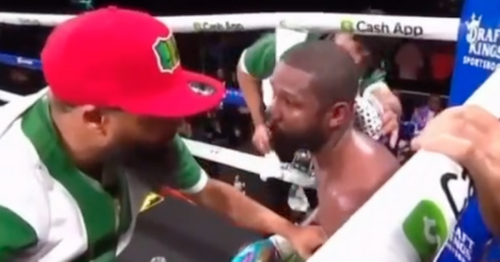 Floyd Mayweather admitted to his corner that he was struggling to hit Logan Paul.

Mayweather was taken the eight-round distance by the YouTube star last Sunday having been unable to stop the inexperienced boxer.

And newly-released footage has revealed Mayweather told his training team that he was struggling to land his jab.

After the first-round his coach said: "Hit him at the top of the forehead with a jab, just step off your back foot.”

Mayweather admitted in response: "It’s hard to hit him with the jab."

His corner added: "Oh. When you get in close, shoot it off the hands up."

Although the rounds were not scored, Paul was widely believed to have 'won' the opening session. 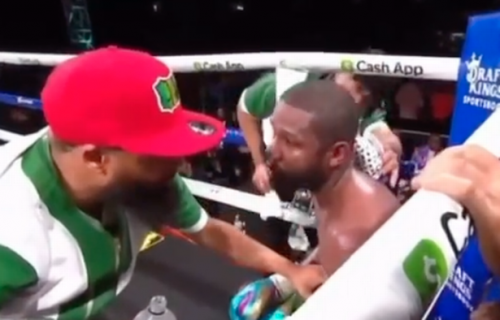 Floyd Mayweather admitted to his coach he was struggling

And his corner concurred with trainer Milton Lacroix saying: "You won [the first] round, but you didn’t win the fight. We’ve got seven more.”

Although he was unable to stop Paul, Mayweather had the last laugh after admitting he saw the event as little more than a "legalised bank robbery".

The retired fighter, who hung up his gloves with a perfect 50-0 record, will earn up to $65million from the exhibition fight.

Figures released today show that one million pay-per-view buys were registered in the United States, bringing in $50m of which Mayweather is believed to be due half.

He was also paid a set fee of $10m and claimed to have been paid $30m by his sponsors.

Paul, meanwhile, is understood to have earned $14m for his night's work.

"I believe in working smarter, not harder. So if it’s something easy like [the Paul fight], a legalised bank robbery, I've got to do it. I have to do it,” he said before the fight.

"My nickname is ‘Money’ for a reason… I worked extremely hard for years and years to get to a certain level. A level where we can start calling everything an event."

And following the final bell he added: “They say, ‘It’s not all about the money.’ Well, your kids can’t eat legacy. The patches on my trunks, [earned me] $30 million alone.

"So who’s really the smartest one in the sport of boxing? When it comes to legalised bank robbing, I’m the best."

The 'rivals' will now take different paths in their boxing careers, however, with Mayweather set to bow out of the sport.

He ruled out a return to the professional game which means no rematch with former UFC champion Conor McGregor.

The pair met in 2017 with Mayweather stopping the Irishman in the 10th round and both men had touted a rematch but that now seems dead in the water.

He will turn his immediate attention to helping his younger brother Jake prepare for his fourth professional bout against former UFC welterweight champion Tyron Woodley in August.