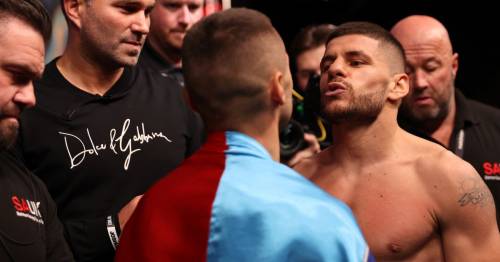 Florian Marku has missed weight for his fight with Maxim Prodan on the Anthony Joshua vs Oleksandr Usyk by .4 lbs.

Marku and Prodan are set to fight for the international welterweight title, but Marku must cut the remaining two-fifths of a pound within two hours to save the title bout.

There would be lenience if there was no belt on the line, but since there is, Marku has to make the extra cut.

Prodan hit the weight, coming in at 146.75 lbs, which is just pushing the 147 lb limit, which the Albanian did miss.

Marku is in a slight bit of trouble heading into the pair's second weigh in tomorrow, with neither man allowed to tip the scales at more than 10 lbs up from their final weights today.

This is due to an IBF rule around title fights for their belts, and will also affect Joshua and Usyk given that the Brit is defending his world titles, one of which is theirs.

Florian Marku has missed weight for his fight with Maxim Prodan
(

The brash former kickboxing champion and MMA fighter has been going for the stoic Prodan in the pre-fight build-up.

And he even had to be restrained by security after their press conference face-off yesterday.

The Albanian faces the toughest test of his rising welterweight career against undefeated Ukrainian Prodan at the Tottenham Hotspur Stadium.

"What mistake did I make fighting with Prodan?" Marku asked at the press conference. "Answer me.

Will Anthony Joshua beat Oleksandr Usyk? Let us know in the comments section!

"We can fight in here if you want, let's fight in here I am ready. He is a piece of s***, he is a no-one and he has fought nobody.

"You think it will go like others, just you wait and see on Saturday night."

The cocky Albanian was unbeaten in his MMA career before taking up boxing, where he has also yet to lose.

And he has also called out the likes of Conor Benn and Josh Kelly as he continues his rise to try and make world-level.

His last outing in February saw him stop Rylan Charlton in a brutal showing, where the unfancied Charlton pushed him to his limit for a number of rounds before the towel was thrown in.

Marku has a loyal fanbase behind him, and is a real ticket-seller at welterweight due to his explosive style and confrontational demeanour.

He is a friend of UFC superstar Conor McGregor, and was supposed to be a part of his training camp for his bout with Manny Pacquiao.

But the McGregor vs Pacquiao fight never ended up happening due to the coronavirus, with the Irishman then losing his two comeback fights to quash the bout.

And it looks highly unlikely now as McGregor recovers from a broken leg, while Pacquiao may have retired from the sport altogether following his loss to Yordenis Ugas.