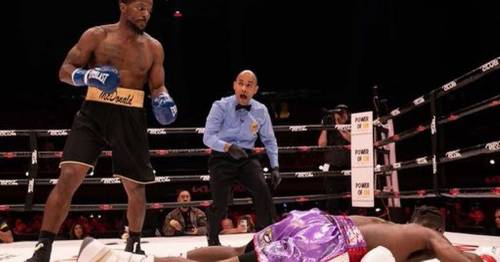 The American star was making the tenth appearance of his professional career on the Triller Fight Club card last night. His opponent McDonald entered the contest with a record of 6-5 and works as an electrician when he is not fighting.

However Holyfield suffered a huge upset to potentially derail the early stages of his career. McDonald detonated a huge overhand right to send Holyfield crashing facedown on to the canvas in a surprise turn of events in the second round.

The young star initially managed to sit up and plead with the referee not to stop the fight. However as he attempted to return to his feet eventually being able to do so, the official held him up and called a halt to proceedings after an eight-count handing Holyfield a conclusive loss.

Holyfield has now failed to match his heavyweight father's spotless record when the boxing legend remained undefeated for the first eight years of his career. The rising star was expected to dispatch of his opponent with relative ease having already recorded six knockouts in his previous nine wins.

He will now face a difficult early rebuild after the brutal stoppage, with his rival McDonald recording the most impressive win of his career to date to improve to 7-5.

What did you make of Evan Holyfield's KO defeat? Let us know in the comments section below

Holyfield Jr followed his father into competing on the Triller label, with the 59-year-old stopped in brutal fashion by Vitor Belfort during an exhibition ring return. The ring legend had not fought since 2011 after announcing his retirement following victory over Bryan Nielsen in Denmark.

But the boxing legend was outclassed by the fresher and younger fighter, with fans having expressed their concerns over his health in the build-up to his iron square return. Despite his son competing in the ring, his son Evan revealed his legendary father did not train him for his fight and was instead just given pointers by the former heavyweight champion.