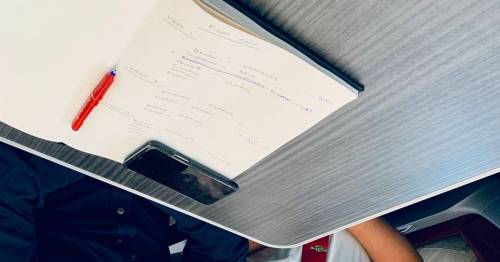 Eddie Hearn's matchmaking plans for his summer Fight Camp have been leaked after he posed for a photo with a fan.

Promoter Hearn was on a train to Newcastle where he will stage a show this weekend headlined by Lewis Ritson.

He was working on his summer schedule at the time and several proposed bouts were written in his notepad.

Most eye-catching is the headline act in week two of his three-week Fight Camp run which will see Kid Galahad clash with Jazza Dickens for a vacant super-bantamweight world title.

Other bouts include Conor Benn against Adrian Granados which is set to headline week one and Joshua Buatsi vs Ricards Bolotniks in a light-heavyweight headliner for week three.

Fight Camp, which this summer will welcome fans, is due to be held on July 31, August 7 and August 14 at Matchroom's HQ in Essex.

Other fighters pencilled in for week one include Anthony Fowler, Jack Cullen and Campbell Hatton.

The second week's card will also see Florian Marku take on Maxim Prodan and world champion Shannon Courtenay defend her title in a rematch with Rachel Ball. Heavyweight Johnny Fisher will also be on the card.

Hearn also has several fighters pencilled in for week three but the only legible name is that of Natasha Jonas who could return following back-to-back world title fights against Terri Harper and Katie Taylor.

Ritson, meanwhile, returns to action this weekend for the first time since his controversial win over Miguel Vazquez.

Most observers felt Ritson had lost the fight but he was awarded the fight by the judges.

He is now one win away from securing a world title shot as he takes on Jeremias Ponce on Saturday.

Asked about his last fight, Ritson said: "I haven’t really watched it back but a couple of days later I went to my dad’s house and asked him if he’d watched the fight.

"He said yes, and I asked him to be truthful about what he thought of it. He was honest and said we got the rub of the green, we got very lucky and we got gifted a decision, but that it is up to me whether to dwell on it or improve on it.

"That’s what we’ve done, we’ve gone away and made a few changes in camp. It was just a clash of styles. I think I was probably Vazquez’ best performance in a few years and it was one of my worst to be fair.

"You live and you learn, there was maybe a few things that we could have done differently in that fight. We know that now and we’ve got the experience in the bank."