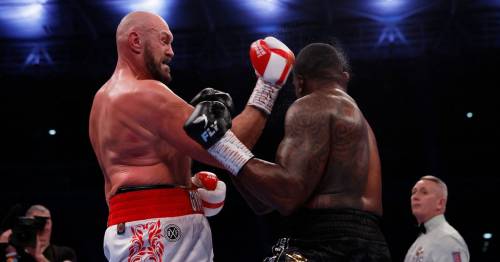 Eddie Hearn does not expect Tyson Fury to retire from boxing and instead believes the champion will face the winner of Anthony Joshua 's rematch with Oleksandr Usyk.

The 'Gypsy King' defeated Dillian Whyte with a sixth-round stoppage to retain his world title last month before confirming his plans to hang up his gloves. Fury is expected to be pushed to make a decision over whether he will vacate his belt with WBC president Mauricio Sulaiman planning to open talks shortly.

Boxing promoter Hearn previously branded Fury a "bluff merchant" over his claim he would retire from the sport and predicted he would remain in the sport. The Matchroom kingpin has now gone one step further and suggested Fury is unlikely to vacate his belt.

"I guess he is going to be asked 'are you retiring, and if you are we need to vacate the belt," Hearn told iFL TV. "But he is not retiring and he won't vacate the belt and that is what I expect to happen. If he does retire good luck to him, he is the master of his destiny and if he wants to walk away from the game fair play to him.

"If AJ beats Usyk and then goes on to beat Fury he will go down as one of the greatest heavyweight's of all time. And if Fury beats them Fury goes down as that and I think he is about that and trying to become great. I think he will want that one more fight and our focus now goes on to AJ on beating Usyk and he can fight Tyson Fury at the end of the year."

Do you think Tyson Fury will walk away from the sport? Let us know in the comments section below

Fury's retirement has been questioned by fans and many inside the sport since his recent victory, with his wife Paris and father John even suggesting he would be willing to step into an undisputed fight with Joshua.

The 33-year-old is arguably in the prime of his career and has already backtracked on his retirement by agreeing to a crossover bout with UFC champion Francis Ngannou. Fury was set to finally settle his rivalry with Joshua last year for the undisputed titles but was instead forced to take a trilogy with Deontay Wilder.

Joshua has called for Fury to honour their gentleman's agreement and take an undisputed title fight if he beats Usyk this summer. "If Fury was in the boxing arena, was to come out of retirement and honour the gentleman's agreement, there's a lot of money to be made," Joshua said. "I feel he's still ticking over and he'll come back if the right fight is presented to him."