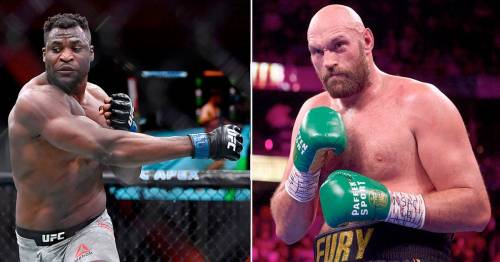 Fury and Ngannou have both called for the match-up to take place, with Fury even offering to do the bout in 4oz MMA gloves, as opposed to the much bigger boxing ones.

Ngannou is one of the most powerful punchers in combat sports, and has knocked out all but one of his UFC opponents within two rounds.

And despite Hearn believing that the prospect of the fight is ridiculous, he has said that he believes the interest that these talks bring to boxing are good for the sport.

Hearn will be hoping to work with Fury a few times this year, first on a fight with and Dillian Whyte for the WBC heavyweight title and then, ideally, an undisputed title bout with Anthony Joshua.

Joshua will first need to get past Oleksandr Usyk in their rematch, while it remains to be seen what Fury will do next as an appeal is underway from Whyte's team over the 80-20 purse split for their fight.

“I think it’s nonsense, but it’s all good,” Hearn said of Fury's Ngannou callout during DAZN’s 2022 launch. “Anything that gets people talking is good.

"It is quite exciting to think of the prospect of Tyson Fury fighting Francis Ngannou in a ring or in a cage, wherever, but I don’t see it happening any time soon.

“Anything like that drives fan engagement, which is good; it’s good for Tyson and Francis Ngannou, boxing and the UFC.

"Anything that gets people talking is good news.”

Hearn himself has attempted to get into the crossover fight business before, staging a Zoom head-to-head between Whyte and Ngannou during the lockdown of 2020, which he branded a press conference.

UFC boss Dana White made sure that it never aired, and has previously expressed that he has little interest in his fighters going over to face boxing champions.

Would you watch a fight between Tyson Fury and Francis Ngannou? Let us know your thoughts in the comments section below!

He allowed Conor McGregor to face Floyd Mayweather in 2017, and it would likely take another potentially record-breaking pay-per-view event to make him consider doing it again.

However, Ngannou vs Fury would be more likely to happen than most given that they are both signed to fight on ESPN programming exclusively.

Todd DuBoef, the president of Top Rank Boxing where Fury is signed, told the Sports Business Journal the fight could be made easier due to both parties having media rights tied to ESPN.

UFC parted ways with their longtime broadcast network FOX in 2018 and signed a deal worth $1.5 billion over five years with ESPN.

DuBoef also added that he thinks a fight between the two heavyweight giants would "do really well".

But Ngannou must first defeat unbeaten interim champion Ciryl Gane at UFC 270, which is not an easy test by any stretch of the imagination.