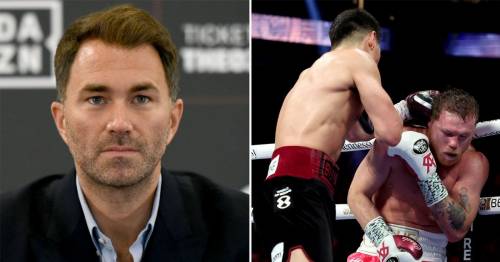 Eddie Hearn has been told by rival promoter Oscar De La Hoya that he is to blame for Canelo Alvarez 's loss to Dmitry Bivol.

Alvarez came up short in his bid to win the WBA light-heavyweight title when he was outpointed by Bivol on May 7 in Las Vegas. The Mexican superstar will move back down to super-middleweight to defend his undisputed titles against Gennady Golovkin in a highly-anticipated trilogy fight.

De La Hoya, who promoted Alvarez up until late 2020, says the Mexican was in a "lose-lose situation" by fighting Bivol. De La Hoya scolded Hearn's knowledge of boxing for putting the fight together and thinks Bivol was "irrelevant" before beating Alvarez.

“It was a lose-lose situation,” De La Hoya said on The MMA Hour. “Nobody knew Bivol whatsoever. I would have promoted Bivol to get a bigger name, because nobody knew who he was before he fought Canelo. He was irrelevant. He was nobody.

What did you make of Canelo Alvarez's loss to Dmitry Bivol? Let us know in the comments section below

"We were actually going to face him against [Gilberto] Zurdo Ramirez, but Canelo has a promoter now who doesn’t come from the boxing world. He doesn’t know the fight game, and he got Canelo beat. It was the wrong style. Las Vegas had no buzz whatsoever.

"When I built Canelo Alvarez, when he crossed the border from Mexico at the tender age of 18 years old and I promoted his first fight, we had a vision. We knew exactly what we had in our hands and we built him to be a monster."

Alvarez sued De La Hoya's Golden Boy Promotions and streaming service DAZN for breach of contract, but eventually re-partnered with DAZN before his title fight against Bivol in a two-fight deal worth $365 million. Alvarez's trilogy with Golovkin will be the last fight of the lucrative deal.

Hearn has become increasingly more involved in the US market, but De La Hoya thinls the promoter is staging meaningless fights. "He’s a character, that’s all it is. The business of boxing, to build superstars, to build champions, it takes a lot of strategy, it takes a lot of insight, knowing the fighters, knowing their styles, and that’s one thing I’m an expert at," he added.

"He’s doing a lot of fights that mean nothing, especially here in the US. He might be a good promoter in the UK, and he’s building European fighters, but that means nothing here in the US."