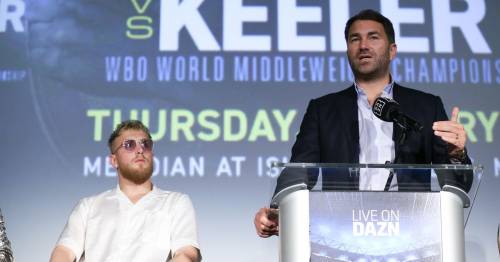 Eddie Hearn has said that Jake Paul's professional debut, which he promoted, "didn't do that well".

Hearn put Paul in the co-main event slot of a world title bout between Demetrius Andrade and Luke Keeler in Miami, which also featured two other championship fights on the undercard.

The YouTuber faced fellow social media star AnEsonGib in both men's first professional bout after winning white collar fights, but the levels were immediately obvious when Paul dropped Gib three times in the first round to earn a TKO win.

But despite heavy promotion, including a celebrity red carpet at the event and a week of media during the Super Bowl, which was held that weekend, the fight apparently wasn't as big of a seller as they had hoped.

Speaking with iFL TV about working with Paul again as co-promoter for the upcoming undisputed lightweight title fight between Katie Taylor and Amanda Serrano, Hearn claimed the fight wasn't a major success.

"It didn't do that well, to be honest with you," Hearn said, before heaping praise on the younger Paul brother for his ability.

"He's had a huge impact on boxing and I feel like most of it is positive, I don't see the downside of it.

"It's not like he's terrible and he embarrasses himself every time he goes into the ring.

"I knew before the Gib fight that he could fight and that he was better than Logan and those guys.

"Obviously, he dismantled Gib who had a stinker that night, there was just levels.

"It didn't do that well, Logan vs KSI was huge, but Jake Paul vs Gib didn't do great business for us."

Hearn and Paul will co-promote Taylor and Serrano's fight, which is being dubbed the biggest in boxing history.

Paul launched his own promotional company Most Valuable Promotions last year with former UFC CFO Nakisa Bidarian, and has signed Serrano as his first athlete.

Are you excited to see Jake Paul and Eddie Hearn work together again? Let us know your thoughts in the comments section below!

"I met Nakisa and Jake and the team and I've got to give them unbelievable credit," Hearn continued. "Look what they've done.

"I couldn't have told you after that night [when he fought Gib] that he'd go on to be doing what he's doing.

"I don't see the hate really, you can think he's a plonker which a lot of people do, sometimes I think he is, but it doesn't mean you can't respect him for what he's done.

"Legitimately, dealing with him for Taylor-Serrano could have been really difficult for various reasons, but I think we'll do more business together.

"Maybe not us involved in his fights but he put Montana Love on his card and we signed him, the same with Liam Paro, he's given these guys a good platform.

"You can't underestimate his numbers draw power and you'll see that in the Serrano fight."