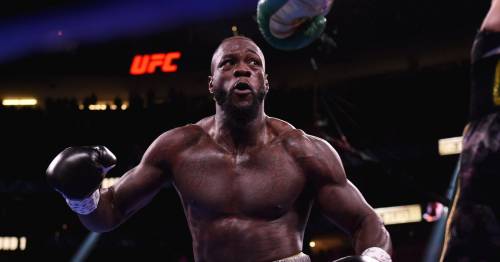 Deontay Wilder is set to undergo surgery on his broken hand injury suffered in defeat to Tyson Fury.

The 'Bronze Bomber' came up short in an epic heavyweight battle in Las Vegas, that resigned him to his second consecutive defeat.

But he certainly wasn't disgraced, coming agonisingly close to victory with a double-knockdown in the fourth round of the contest.

But his power caused a broken hand injury to occur during the fight, which he will now receive emergency surgery to repair in the coming days.

His co-manager Shelly Finkel has given an update on his health, and expects the American to return midway through next year.

"Deontay broke his right hand behind the third knuckle and he has to have that fixed next week," Finkel told The Sun.

"He has to have surgery, the knuckle is OK, it’s the bone behind the knuckle that broke. He’s sore but he was OK, he was home yesterday.

Wilder was immediately taken to hospital after the defeat, where he faced subsequent medical check ups on his health.

And at that point they discovered Wilder had a suspected broken hand, but he was later released from medical care.

Who will Wilder face on his return next year? Let us know your prediction in the comments section below.

He was slightly bitter in defeat after the fight, and faced criticism from Fury for his "lack of respect" after leaving the ring.

Despite the nature of the second defeat to Fury, Wilder's trainer Malik Scott believes that the 35-year-old is not ready to hang up his gloves yet.

"Deontay has set his family financially secure so he doesn't have to fight to make a living," Scott told iFL TV.

"But retiring is not in his plans at all and not something we've discussed. "He will be back in any form he wants to be. He's a big-time fighter and he doesn't belong down there with the other guys, he needs to be in high-level fights and main events.

" Deontay Wilder was great on Saturday, but Tyson Fury was even greater – it was a great night of boxing for the heavyweight division.

Deontay Wilder dropped Tyson Fury twice in the fourth round
(

"You have to give Fury credit for having a good chin and getting up. Fury is a legend and one of the best in the heavyweight division in any era, and it's the same about Deontay."

Wilder was given positive feedback, after his brave performance allowed him to recover from multiple knockdowns before bowing in defeat.

And pound-for-pound king Canelo Alvarez has called for Wilder to improve his technique in order to build on his performance against Fury.

Meanwhile the 'Gypsy King' has made a return home to the UK, after partying into the early hours in Las Vegas.

And he could now face an immediate challenge from Dillian Whyte, who was instilled as the WBC mandatory challenger for his belt.

But first Whyte must progress beyond Otto Wallin, which gives the 33-year-old time to relax and return to his family home and routine.