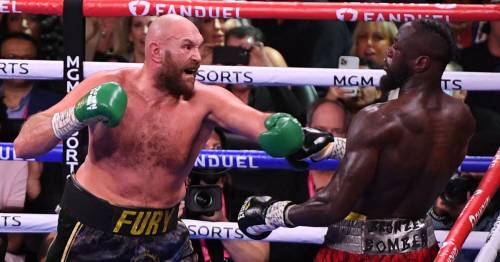 Deontay Wilder will not be allowed to return to the ring until next April following his brutal defeat by Tyson Fury.

Wilder was stopped in the penultimate round of the trilogy fight having hit the canvas on three occasions as he lost to the Brit for the second successive time.

He was taken to hospital to be checked over before being discharged later on Saturday night with a broken finger and the Nevada State Athletic Commission will not permit him to fight until April 8 unless his finger is cleared by a doctor.

Fury has been give a standard 45-day 'suspension' following his efforts in retaining his heavyweight world title.

Fury's victory brought a concussive end to a rivalry that had raged for almost three years but the Brit had to earn victory the hard way by twice climbing off the canvas in a pulsating fourth round.

He had dropped Wilder in the previous session before doing the same in the 10th and 11th rounds.

Deontay Wilder was knocked out in his loss to Tyson Fury
(

Fury returned to the UK on Tuesday to spend time with his extended family which includes his six children.

Should he come through that, he will surely target the winner of Anthony Joshua's rematch with Oleksandr Usyk which is set to take place in March.

Wilder faces a more uncertain future after suffering his second professional defeat as he prepares to have surgery on his hand.

His trainer Malik Scott wants his charge to take some time off – but insisted the former champion won't retire.

"I really don't want Deontay talking about boxing or doing. nothing to do with boxing for quite some time, I want him to get some rest after this.

"Even after the last fight he was so worked up he never really got to rest. He deserves a good rest and we'll make sure he gets it. I'm going to head down to Tuscaloosa in a few days to spend some time with him.

"Deontay has set his family financially secure so he doesn't have to fight to make a living.

"But retiring is not in his plans at all and not something we've discussed. He will be back in any form he wants to be; he's a big-time fighter and he doesn't belong down there with the other guys, he needs to be in high-level fights and main events.

"Deontay Wilder was great on Saturday, but Tyson Fury was even greater – it was a great night of boxing for the heavyweight division.

"You have to give Fury credit for having a good chin and getting up. Fury is a legend and one of the best in the heavyweight division in any era, and it's the same about Deontay."

One potential fight for Wilder is a mouthwatering, blink-and-you-miss-it clash with Anthony Joshua.

The Brit faces a revenge mission in his rematch with Oleksandr Usyk next year but if he loses will be in need of a dance partner.

Previous : Amazon driver who had heart attack at wheel saved by two lifeguards in car behind
Next : Jake Paul and Tommy Fury “very close” to agreeing fight for early December