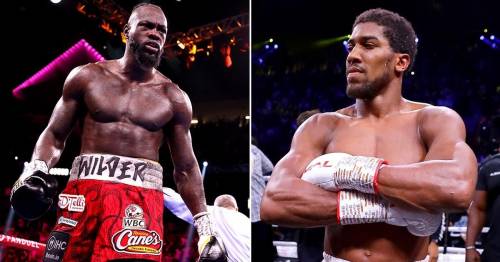 Deontay Wilder may look to challenge Anthony Joshua upon his ring return after defeat to Tyson Fury.

The 'Bronze Bomber' was stopped in devastating fashion in Las Vegas, with a textbook right hand from Fury ending his night before the final bell.

And the spectacle was considered one of the modern-era classics in the heavyweight division, with the rivalry now over.

READ MORE: AJ told to be less of a "good loser"
JOSHUA vs FURY: How much PPV fight could cost
X-RATED: Fury's warning to rivals after Wilder KO

But the 35-year-old will not look to retire, and will instead challenge Joshua next year.

“My gut says the big fights. It’s not on the drawing board now, but he would love to get Fury back again," Wilder's co-manager Shelly Finkel told SunSport. “But again, it’s early and we have to get through Usyk and Joshua and see a couple of other possibilities.

Wilder was immediately taken to hospital in the aftermath of the defeat, to assess a potential broken hand injury.

And he will now undergo surgery to repair the damage, which was suffered in the latter stages of the fight.

HAVE YOUR SAY! Wilder or Joshua: who would win? Leave your prediction in the comments section below

But after the fight he was disappointed with Wilder's reaction to defeat criticising his lack of "respect" for his achievements.

Nonetheless, Fury returned to the UK and took a 240-mile taxi back to Manchester from London.

And he will now face the noise of a challenge from Dillian Whyte next, who was enforced as WBC challenger ahead of the trilogy.

But the 'Body Snatcher' must first progress beyond a stern test against Otto Wallin to secure his long-awaited shot.

Although he has demanded that the WBC help take action to enforce the world-title challenge next year.

"Fury has the belt. Wilder had the chance to fight me for three years but didn't," Whyte told Sky Sports News.

"Hopefully now the WBC forces my position and Fury has no choice. It's a massive British fight, a major fight for Britain.

"Fury is an unpredictable man who might say: 'I am done!' "I hope we can make a fight when I get past Wallin. But Fury is a difficult guy to plan. I haven't heard a word from him about making a fight.

Wilder now faces a turn back to the drawing board, as he looks to revive his career after three failed missions against Fury over the last couple of years.

Previous : Why white privilege cannot be ignored – from school exclusions to ‘CV whitening’ and crime
Next : Tyson Fury could be granted audience with the Pope after win over Deontay Wilder