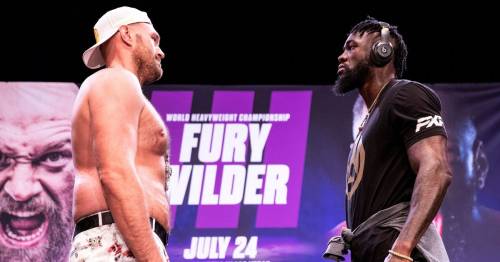 Deontay Wilder has doubled down his belief that Tyson Fury faked his coronavirus diagnosis to earn himself more time to train for their trilogy fight.

The former world heavyweight champion insisted on a third bout between the pair despite being thoroughly beaten in their rematch last year.

They were set to square off in July 2020, but the coronavirus pandemic put a stop to all major boxing, before their later dates were cancelled and Fury ended up moving on to plan a unification bout with Anthony Joshua.

But Wilder wouldn't consider taking another fight, and took his case to arbitration, ultimately having a third bout ordered.

And when Fury contracted coronavirus just weeks out from the July 24 date at the T-Mobile Arena in Las Vegas, the event was moved to October 9.

“I’m just tired of the lies," Wilder said in an interview with 78SPORTSTV. "That’s all it is, lies.

“That’s what I believe – and a lot of other people do too – the whole world believes it’s nothing but lies and it really sickens me to hear that because so many people have died of COVID.

Deontay Wilder has claimed Tyson Fury lied about having covid
(

“People I know have had family members to die of it, to hear others using this as an excuse to get out of something is just horrible man.

“May they burn in hell for that. Especially for something like this."

Wilder was concerned to see Fury out and about in Las Vegas posing for photos with fans just days after their fight was pushed due to his positive diagnosis.

And he thinks that this is enough of a reason to believe that the outbreak was a lie, despite a number of sources confirming that Fury, and a number of his training team, tested positive for a virus.

It is the latest in a string of conspiracy theories about Fury that Wilder has perpetuated, including claims that he tampered with his gloves for their rematch.

“The dude said he had COVID, then the next minute you see him in so many different places," Wilder continued. "It’s just ridiculous.

“He’s been trying to run away from me since July of last year, he’s paid hundreds of thousands of dollars to try to avoid me.

“They came up with so many excuses to try to avoid me. They contradict themselves so many different times and it’s just ridiculous at this point. You need to put up or shut up.”

Fury, and a number of members of his team, have disputed the theory that the diagnosis was fake, with his coach Andy Lee telling Mirror Fighting last month that he was one of the victims.

Who will win the trilogy fight between Deontay Wilder and Tyson Fury? Let us know in the comments section!

"I recently had covid when I was in America," Lee explained. "I was with Tyson and we both got it and the fight got cancelled due to it.

"I had about three or four days of being really tired, but I didn't lose my smell or taste, I had no temperature but it's a serious, serious thing and you don't want it.

"Especially as a sportsperson, it would make you have to pull out of a fight.

"Tyson had the same kind of thing as me, and I feel fine."

And Fury has even said that his Covid-19 diagnosis that cost him the title fight was not the first time he caught the virus.

“That’s the second time I have had Covid now," Fury said. "I had it back in the first lockdown and then I got it again.

“Covid is no joke that’s for sure, I didn’t feel I was totally dying at that point but I certainly wasn’t going to get cleared to fight because I was still positive.

“This virus has killed people all over the world and it is no joke, so people can believe what they want to believe.

“It is just opinions of sheep it doesn’t matter to me, I don’t give a f*** what they believe to be honest.”