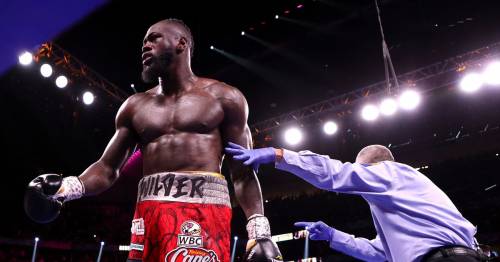 Deontay Wilder has been accused of "hand-picking" opponents after his second defeat to Tyson Fury.

His latest rivalry with Fury now looks completed, after he was stopped in the 11th round of their third meeting.

Despite the result, Wilder fought defiantly and came close to a stoppage of his own with a double-knockdown in the fourth stanza.

"Wilder fought a bunch of hand-picked guys. I mean, who did he beat," Atlas told Submission Radio. "Other than [Luis] Ortiz who was 40 years old? Who did he beat?

Deontay Wilder suffered another setback in defeat to Tyson Fury
(

"It was like, they lined up a bunch of bowling pins in a bowling alley and he knocked them over. He fights his… first real fight, maybe, you could argue and it's with [Tyson] Fury and a lot of people thought he lost. He gets a draw and then he fights the rematch and then he gets run over.

"That's what he [ Deontay Wilder ] did that night and that's why the fans now respect him in a whole whole different way, even though he lost."

Wilder was indeed valiant in defeat, scoring a double-knockdown against Fury in the fourth round.

But he was unable to maintain the work-rate, and was floored by the finishing right hand in the penultimate period.

Who should Deontay Wilder face on his return to the ring? Let us know in the comments section below.

And he will now undergo surgery on a broken hand injury, immediately being taken to hospital post-fight.

Despite this result, his trainer Malik Scott remains confident he will not retire.

"Deontay has set his family financially secure so he doesn't have to fight to make a living," Scott told iFL TV. "But retiring is not in his plans at all and not something we've discussed.

"Over the years of me knowing Deontay, he has always said throwing the towel in with a knockout artist like him wouldn't be tolerated. It's something I respected. The last knockdown was the worst knockdown and the ref called it off.

"Deontay and Mark never had a relationship outside the gym, they never talked for more than five minutes on a phone call. Me and Deontay would never fall out and not speak again – our bond is too tight."

His opponent Fury has now returned to the UK, after remaining in Sin City to celebrate his victory in spectacular fashion, partying until the early hours.

But Fury is set to return to business next year, with British rival Dillian Whyte in place to make a challenge for his WBC heavyweight title next.

Although he must first progress beyond Otto Wallin, with Fury's promoter Frank Warren calling for the 'Body Snatcher' to avoid the challenge.