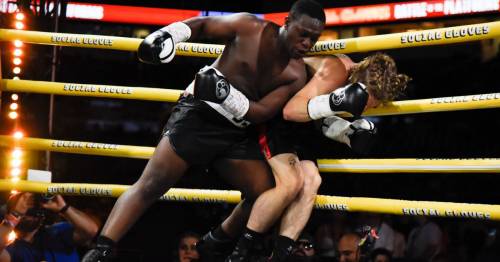 YouTube stars Deji Oleatunji and Alex Wassabi will headline a YouTube boxing card at the SSE Arena Wembley on March 5.

The event, promoted by Showstar Boxing, will also feature a bout between Thomas 'Faze Temperrr' Oliveira and 'King Kenny' Ojuederie in the co-main event of a six-fight card.

Olatunji is making his return off the back of a disappointing showing in his second fight last summer, when he lost to Instagram model Vinnie Hacker by third round TKO.

He was the first opponent that Jake Paul faced in 2018, and took the American into the fifth round of a fight where he caused Paul to bleed early.

Olatunji is one of only two men to take Paul past the second round, and is known for his impressive natural ability if he can improve his fitness.

Wassabi, on the other hand, has been training for years, but after being publicly knocked out in a sparring session with Yousef 'Fousey' Erakat, he struggled to find match-ups.

Further bouts are set to be announced shortly, but here's what we know about the event so far…

When is the Deji vs Alex Wassabi fight?

The event takes place on Saturday, March 5 at the SSE Arena, Wembley in London.

Doors for the show will open at 5:45pm according to fans who have bought tickets, so expect the first fight at around 6pm.

Bouts will likely be shortened to around five rounds of two minutes, expect this card to be a little bit shorter than your standard boxing card.

The event will likely be made available on a pay-per-view stream from Showstar's website, although there are no details as yet.

If you're around London, tickets are on sale at this link.

Prices start at £36, and if you want to sit ringside it will cost £146, with the first thousand ticket buyers being entered into a raffle for an Ultimate VIP package.

What are the rules?

The amount of rounds and how long they are still remains to be seen.

However, it has been confirmed that fighters will wear 12oz gloves and no headgear, in a big difference from previous events.

Last summer when YouTubers fought the stars of TikTok in Florida, they wore 16oz gloves, and prelim bouts had light headgear.

The last time we saw YouTube boxing in the UK when KSI fought Logan Paul, they both wore 16oz gloves and headgear, so the likelihood of knockouts is now much higher.

It also appears that Faze Temperr and King Kenny will be fighting in a "winner take all" bout, where the loser forfeits their purse to the winner.

Are you excited for the next YouTube boxing event? Let us know your thoughts in the comments section below!

As of now, only two bouts have been announced, with a further four to come.

Deji: “I’m going to be fighting main event on the Showstar UK vs USA event at the Wembley SSE Arena.

“Alex Wassabi, you desperate f***er. You got your wish, I’m going to bury your already dead career.

“You ran from my bro but there’s no escaping me – I’m going to put you to sleep on that canvas, March 5th.

“I want to see all my fans there to witness my redemption, damn straight.”

Previous : Ukraine: some signs that cyber attack linked to hacker groups associated with Russia
Next : Chris Eubank Jr hits out at “keyboard warrior” Liam Williams ahead of grudge fight