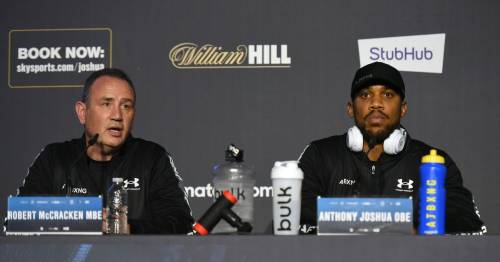 David Haye is confident Anthony Joshua does not need a new trainer and has instead blamed the heavyweight's "intent" for his defeat to Oleksandr Usyk.

Joshua lost his unified heavyweight titles against Usyk in September after being comprehensively outboxed by the former cruiserweight champion.

And he has been spotted touring gyms in America before admitting he would like to add a new coach to his current team alongside Rob McCracken, providing his long-term trainer can work with a new arrival.

But former cruiserweight champion Haye believes Joshua has himself to blame for defeat against Usyk.

"No I don't think he needs a new trainer," Haye told IFL TV. "I don't think the reason he lost to Usyk was anything to do with his trainers or conditioning coaches.

"I think it is to do with an intent thing, he did not appear as though he was intent to knock him out and he was trying to box his way to victory.

"It appeared as though he was trying to box like he did against his previous meeting against Pulev and the one before that against Andy Ruiz.

"Maybe he believes that he is a long range boxer and that has worked for him great from time-to-time, but I think he has to adjust depending on the opponent and to become comfortable with using his size again. And that needs to be implemented during inside fighting."

Joshua's corner team has faced heavy criticism in the aftermath of his defeat after seemingly being content with his performance in the latter rounds.

But 'AJ' will get his chance to immediately regain his titles and become three-time world champion with a rematch in negotiations for next year.

Joshua has already completed one redemption mission, in Saudi Arabia last year, when he avenged defeat to Ruiz with a slick boxing display to reassert his status as a leading heavyweight.

Joshua is fired up to complete his chance at revenge next year and has already re-entered the gym despite admitting he is seeking new guidance.

Do you think Anthony Joshua needs a new coach to overturn defeat to Oleksandr Usyk? Let us know in the comments section below.

Canelo Alvarez's trainer Eddy Reynoso has moved himself to the front of the queue to take the rule after revealing his additional talks with Joshua.

A win for Joshua in the rematch could rekindle hopes of an undisputed heavyweight showdown with rival Tyson Fury who could be forced to face Dillian Whyte in the meantime.

And Fury's father John has defended McCracken's role in Joshua's defeat commending him for keeping the champion on his feet until the final bell.

He told BT Sport Boxing : "Robert McCracken was trying to keep him on his feet. He was giving him the advice to get to the 12th round and not get stopped.

"I think if AJ would’ve fought any other way he would’ve got stopped. Usyk would have knocked him out.

"It was like a caution sort of thing, happy to come second best. What can you do if your man is in that state of mind, it’s your job as a trainer to keep him on his feet."

Previous : U.S., Turkey agree on terms to end digital services tax, trade retaliation-Treasury
Next : Knifeman tried to kill his love rival and ‘chop his d*** off’ in horror knife attack