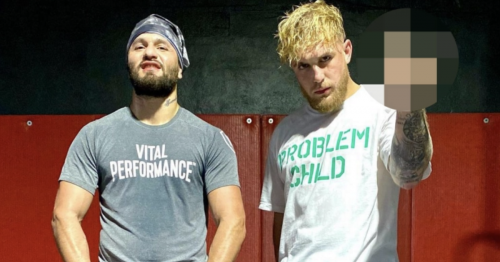 Paul has been gunning for a fight with Masvidal since improving to 4-0 last month when he outpointed Tyron Woodley in Cleveland.

Masvidal was once on good terms with the internet star, helping him prepare for his fight with Ben Askren earlier this year.

Their relationship changed when Masvidal – who is a a long-time training partner of Woodley's – backed the former UFC champ to beat Paul.

Paul didn't take kindly to Masvidal's prediction and labelled him an "airhead" which turned their friendship sour before Paul recently called out Masvidal – who is still under contract with the UFC – for a fight.

UFC president White was then asked whether he would let Masvidal out of his contract for a one-off fight with Paul in the boxing ring.

He said: "[Jorge] Masvidal's under contract with me. Hey Jake, Anderson Silva's out [of contract]. Jake? Jake? Jake?"

"I f****** guarantee you this, you ain't going to see Jake Paul calling Anderson Silva out. That I f****** promise you. He's his size and he's actually good.

"He's old, which is what Jake Paul likes, to fight old guys that are too small and that are absolutely positively washed up."

Other than his win against YouTuber AnEsonGib, all of Paul's professional fights have come against opponents in their late 30s.

Paul wants to move on from fighting "old guys" like now-retired UFC welterweight Askren and Woodley to fight actual boxers such as Tommy Fury.

Who would win in a fight between Masvidal and Paul? Let us know in the comments below

Paul recently appeared on The MMA Hour and said that whilst he wouldn't completely rule out a fight with Silva, the 46-year-old would have to undergo strict testing given his age.

He said: "I'm sorry but I'm built different, it would be a lot of punishment for him and I wouldn't wanna take out the old guy. There's a thing about Jake Paul fighting old guys and retired guys like Ben Askren and Tyron.

"If I were to fight Anderson Silva everyone would just be like 'oh just another old guy' after I beat him.

"So it's kind of a lose-lose situation, but it could be interesting if he undergoes testing and we could figure something out. I think our teams are talking a bit, but we'll see."