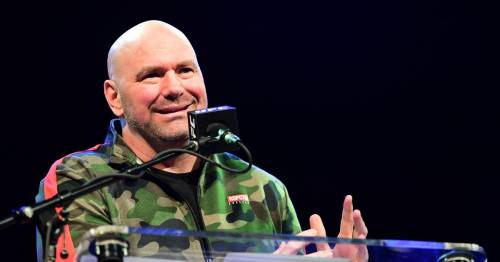 White eagerly anticipated the third fight between Fury and Wilder as much as any, with the Brit claiming victory in a thriller, coming back after being knocked down twice to dominate and claim victory in the penultimate round.

White was asked about his thoughts on last weekend’s fight during a Contender Series event and the 52-year-old admitted he was thrilled by the Las Vegas showdown.

He said: “I thought it was awesome. I think that the heavyweight fight that happened on Saturday.. and let me just tell you this (first).

“Going into it, my thought process was ‘for what, why?’ you know what I mean.

“It was an incredible heavyweight fight. I thought both guys fought their asses off. And for Fury to come in at 277lbs and you know fight the way that he fought. Get knocked down, get back up and keep fighting.

“It was just, it was exactly what boxing needed. So, glad it happened and congratulations to both of them, everybody involved and the sport of boxing.”

Wilder and Fury first met back in 2018, where ‘The Gypsy King’ survived a dramatic late knockdown in the final round to split a draw – although Fury believed he had deserved to take the win.

The long-awaited rematch arrived in February 2020, with Fury a confident winner, claiming a seventh-round knockout.

That had looked set to put Fury on course for a Battle of Britain with Anthony Joshua, only for Wilder to invoke his rematch clause. But now, after a hard-earned victory, their three-year rivalry is finally at an end.

On Tuesday, Fury returned to the UK to spend time with his extended family which includes his six children.

He will likely face fellow Brit Dillian Whyte early in 2022, as long as Whyte beats Otto Wallin later this month.

Whilst Fury’s path is more or less laid out, Wilder faces a more uncertain future after suffering his second professional defeat and preparing to have surgery on his hand.

Wilder’s trainer Malik Scott wants his boxer to take some time off but insisted the former champ won’t retire.

He said:"I really don't want Deontay talking about boxing or doing. nothing to do with boxing for quite some time, I want him to get some rest after this.

"Even after the last fight he was so worked up he never really got to rest. He deserves a good rest and we'll make sure he gets it.

"Deontay has set his family financially secure so he doesn't have to fight to make a living, but retiring is not in his plans at all and not something we've discussed.”