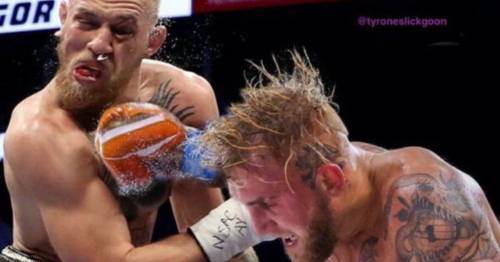 Conor McGregor has been warned he will have to face Jake Paul before their respective fight careers are over.

Former two-weight UFC champion and YouTube star Paul appear to be on a collision course despite their very different sporting careers. Paul has amassed a record of 5-0 as a professional boxer and has long had his sights set on luring McGregor into the ring.

The Irishman had been reluctant to engage with the social media star but last weekend he hit out at Paul's attire as he sat ringside for Katie Taylor's win over Amanda Serrano. Paul subsequently promised he would fight – and beat – McGregor before their careers are over.

And UFC middleweight contender Paulo Costa has now weighed into the debate by tweeting a mocked-up picture of Paul landing a right hand on McGregor in a boxing fight. Costa captioned the photo: "This day is coming."

Paul will make his return to the ring on August 16, likely against Tommy Fury or Anderson Silva, while McGregor is continuing his recovery from the broken leg he suffered against Dustin Poirier last summer. He has two fights left on his UFC contract but is unlikely to fight again before August.

Should Conor McGregor fight Jake Paul? Let us know in the comments section below

And Paul insists he will lock horns with the Dubliner one day. "It is what it is," Paul said when asked about McGregor's trolling last weekend. "Of course Conor's watching to support Katie.

"We had a little bit of banter back-and-forth, but of course he always has something to say but he doesn't really have a place to talk. He hasn't won a fight in five years, Dana [White, UFC president] owns him and I'm the one that got Katie Taylor a big payday and that's his hero.

"Conor McGregor's not tall enough to ride a rollercoaster and I feel bad for him because he's ducking me. But we'll get that settled one day."