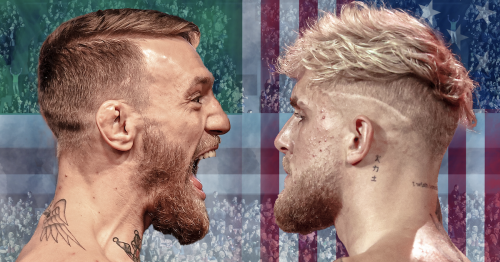 Conor McGregor has followed Jake Paul 's manager Nakisa Bidarian on Instagram after the YouTube star continues to push for a fight with 'Notorious'.

Bidarian is the UFC's former Chief Financial Officer who represents Paul and his management company Most Valuable Promotions.

He worked for the UFC during McGregor's run to becoming a two-weight world champion in 2016 and played a role in the promotion's $4bn sale to Endeavor that year.

Paul has called out McGregor on several occasions since ditching his internet fame to devote himself to boxing last year.

If a crossover fight between the two combat sports stars was to happen, Bidarian would likely be an important part of the negotiations due to his pre-existing knowledge of the UFC.

"He's already ducking me, I'm [going to] beat McGregor [in] five fights just exactly like you said, five fights from now, what's up?"

McGregor has been sidelined since last July after breaking his foot in a trilogy fight against Dustin Poirier.

The UFC star has two fights left on his current deal and is expected to return to full training in April, booking his next fight shortly after that.

Despite McGregor topping Paul in their fight earnings last year, the American thinks McGregor needs him for a big payday.

“It makes financial sense. At this point, he needs me more than I need him. He’s a f***ing loser," he said.

Will Jake Paul ever fight Conor McGregor? Let us know your thoughts in the comments section below

"The guy’s a mess, he hasn't won in four years or something so like I said, he needs me more than I need him."

Paul is unlikely to fight McGregor whilst the Irishman is under UFC contract due to the promotion's president Dana White stating he would never work with the 24-year-old.

White has also trashed his former employee Bidarian by labelling him a "scumbag".

And Paul thinks McGregor's value in the UFC will go down if he continues to lose fights.

"I think Dana White is obstacle No.1. If Dana would ever let Conor out of his contract to set up the boxing match, I think that's what is needed to make it happen," he told Graham Bensinger.

"And I think that will, I think it will happen and if Conor is going to just continue to lose fights – he's 1-4 in the past five years – then there's not much Dana will be able to do with him anyway."

Previous : When is Floyd Mayweather vs Money Kicks? Fight date, time and undercard
Next : Prince Andrew spotted with Fergie for first time since royal stripped of his titles