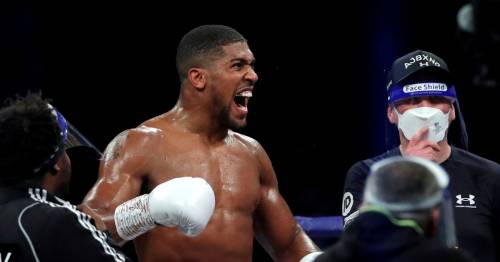 Chris Eubank Jr has predicted Anthony Joshua will be too powerful and strong for Oleksandr Usyk in their unified heavyweight world title clash next weekend.

'AJ' makes his ring return in a huge showdown at the Tottenham Hotspur Stadium in the latest of his series of world title defences against the tricky Ukrainian.

The Briton was set to fight in a historic undisputed clash with domestic rival Tyson Fury, but the fight was derailed after Fury was forced to face Deontay Wilder in a trilogy bout after a contract dispute.

And Eubank Jr has predicted that Joshua will be "too strong" for Usyk on the night despite acknowledging the Ukrainians "smart" boxing style.

“It is a fun fight, but Joshua is too big, too strong and too tough," Eubank Jr told Mirror Fighting .

“Usyk is extremely smart and can certainly box he has shown that at cruiserweight but I just don’t think he has the size to beat someone like Anthony.

“And Anthony has shown that he is smart too, he demonstrated that in the rematch with Ruiz where he really boxed well.

“So personally I would fancy Anthony to win that fight.”

Joshua could well face a stern test against the tough Ukrainian who is currently undefeated and has previously reigned as undisputed cruiserweight champion before moving up to the blue-ribbon division.

But the 31-year-old has revealed that he is targeting a "trim down" as he looks to use his technical boxing and size advantage in a "fight for the brain".

"I'm looking trim for this fight. I'm fighting a guy who is a 12-round fighter. So it would be silly of me to go in there bulky with my muscles screaming for oxygen," he told Sky Sports.

"I've been training like a 15-round fighter in this camp. I will be well-conditioned to fight. That is key. What happens when I train that way? My body adapts and takes its natural form. This is the form it has taken.

"Movement means you are never stationery to get hit. Movement is important. Concentration – when you want to [punch], you lock in, then make a move. You have to make sure your brain works. That can be mentally fatiguing so I am sharpening the mind so that I can concentrate for the 12 rounds.

"Also I practice having the ability to [punch] four times, not just once. It's a fight for the brain. Knowing what you've got in front of you and knowing how to deal with it.

"You can either be aggressive, corner [him], throw everything at it. Or take your time, be clever, then knock [him] out."

His undisputed clash with Fury was set to be Joshua's biggest challenge to date, but it collapsed and the 'Gypsy King' has revealed he was "never optimistic" that the fight would take place.

But the pair have both rarely agreed that YouTube stars Logan Paul and Jake Paul are a good addition to the boxing roster, and insist that it will bring a new audience to the sport.