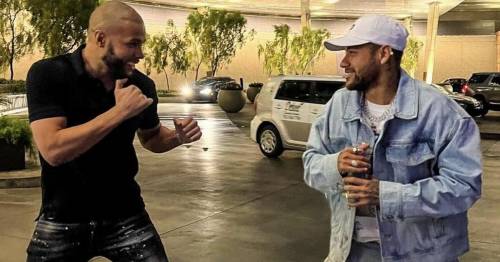 Chris Eubank Jr has joked that he almost had to get physical with football superstar Neymar after losing a game of poker.

The Paris Saint-Germain forward has been enjoying the off-season in Las Vegas, where the World Series of Poker has been taking place for the last few weeks. And after winning a big pot against boxer Eubank Jr, the pair posed for a photo 'squaring off' outside the plush Nevada hotel in which they were playing.

The duo had smiles on their faces and the boxer's Instagram caption read: "He beat me in a big pot with a straight flush!! So we had to go outside & settle the score."

Six years after first qualifying for a seat at the table, Neymar made his first in-person appearance at a World Series of Poker event earlier this week. He followed that up with a game against British middleweight Eubank, who is preparing for his ring return.

The boxer posted a video of himself with his footballing pal – said to be worth £163million – on Instagram, saying: "Look at this guy, straight flush." As the camera zoomed in on the winning hand, the Brazilian star can be heard saying: "Straight flush, my guy."

The video continues with Neymar laughing in the background as Eubank jokes that he will never beat him. "Straight flush," he says. "How does this guy do it? I can't beat this guy. Every hand. The best, huh?"

Eubank has been plotting a summer return to boxing, but as yet has been unable to seal a big name fight. His longest-time interest was a bout with the legendary Gennady Golovkin, who is now set to face Canelo Alvarez in a trilogy at super-middleweight.

Now, he has been eyeing up a rematch with old rival Billy Joe Saunders, as well as reportedly beginning early talks with Conor Benn for what would be an exciting domestic bust-up. Given their fathers' history in the ring, it could be a massive seller, but there is a vast weight difference between the pair as it stands.

Would you like to see Conor Benn and Chris Eubank Jr fight? Let us know your thoughts in the comments section below!

"Summertime, I want to fight two more times this year, once in the summer and then in the winter," Eubank Jr told Mirror Fightingback in February of what he wants to do next. "Nothing official yet, however. Golovkin is a very hard man to pin down.

"We are trying our best but there is a lot of politics in boxing and a lot of hoops you have to jump through to get a world title shot. Time will tell and the fight will happen but whether it will happen next I am not sure but we are trying everything we can to pin him down.

"Anyone with a world title I am looking to fight, it is a stacked division with four world champions there and these fights can be made. There is a long list of fighters that we can get in the ring with and some awesome fights the public would love to see, and there are big names out there for me to fight domestically."