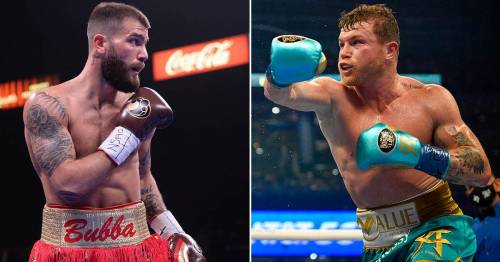 Chris Eubank Jr believes Caleb Plant will run from Canelo Alvarez – and that the Mexican will become undisputed champion.

Alvarez will bid to win the final belt at super-middleweight when he takes on IBF champion Plant on November 6.

Eubank Jr has aspirations of his own to face Mexican legend Alvarez and is confident he has the style to succeed where he expects Plant to fail.

"Everyone has a chance, but I just don't see Plant beating him," Eubank told Mirror Fighting . "He is not a bad fighter, but he's not going to fight Canelo he is going to run and he will try to survive and nick it.

"We have seen time and time again over the years of fighters trying to do that and it never works, and Canelo has that style of fight figured out and he will get you eventually.

"You have to march forward and fight fire with fire, you have to try and push him back and out punch him because let's face it who has done that?

"He has never had to deal with that, so I don't see him having the game-plan for that, and that is the only way I know how to fight.

"So this is where I get my confidence from and I believe I can beat Canelo."

Plant himself has continued to open up on his desire to fight Alvarez, and believes that his style could make the fight very awkward for the pound-for-pound king.

And the American is extremely confident of defeating the Mexican and believes that "experience" will play no part in the fight.

“I mean, he’s a great fighter,” Plant said. “He’s been around for a long time and he’s accomplished a lot, but you know, within his first 30 fights I was probably fighting better competition than he was in the amateurs. I’m a Golden Gloves national champion, I’m an Olympic alternate.

"But, you know, I know he’s got experience on me, but everybody that I’ve ever fought had more fights than me. So, experience is a factor, but it’s not the determining factor.

"So, he’s a good fighter, but there’s no way that he’s better than me, and I truly believe that in my heart.”

The coronavirus pandemic has threatened to hamper several fights including Fury's clash with Wilder that was originally postponed after an outbreak in Fury's training camp.

But Plant has revealed he is now double-vaccinated for Covid-19 in order to prevent "disruption" to the undisputed clash at super-middleweight.

“You know, no one’s, you know, put a guy to my head and said, ‘You have to sign this for the vaccination,’ or anything like that," Plant continued.

"But I’m not opposed to people getting the vaccination. You know, but I feel like if you’re healthy and you’re young and you’re strong, like I am, you know, the long-term effects, I’m not exactly sure what they are.

"And I’ve already sacrificed so much for the sport. Like I talked about, I’m not gonna let something like COVID get in the way of stopping me from obtaining my destiny.”