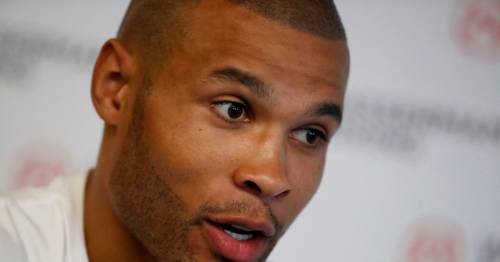 Chris Eubank Jr has drawn up a five-fight shortlist in his bid to become world champion – including Canelo Alvarez, Billy Joe Saunders and Gennady Golovkin.

The British middleweight will make his ring return against Sven Elbir in October as part of Wasserman Boxing's new partnership with Sky Sports.

And Eubank Jr is determined to be an active fighter having fought just once since 2019 in a routine victory over Marcus Morrison earlier this year.

”We are looking for them big fights that the public want to see, obviously Golovkin has been on my radar for years now and we are just waiting to see if he is fighting or not," he said at the Wasserman media day. “I don’t see how that fight can’t happen over the next 12 months, there is no way that fight can’t happen.

Chris Eubank Jr has a list of potential opponents
(

“I have now been made mandatory for that WBA super title, so hopefully I can potentially receive an offer to get a shot at that.

“You have Liam Williams domestically who has always called my name, Canelo Alvarez at 168 pounds that I would certainly move up to take that fight.

“I see all these names but I’m not sure they will take these fights, and of course Saunders that rat calling my name with no belt and no credibility.”

The 31-year-old has been persistently linked with Golovkin since his rise began in the middleweight division, but a fight has always slipped away at the last minute.

But despite his link with Golovkin, he has now admitted that he would be willing to take on a rematch clash with Saunders in the future.

“Saunders that rat is still calling my name even though he has no credibility left in the sport and no belt, but is that a fight I would take yes, there is a lot of history there and we have a score to settle," Eubank Jr continued.

“So the possibilities are endless, it is up to the Sauerland’s to get me in the ring with these guys and I can do the rest.

“That’s the exciting thing about my position now, there is so many shots and plenty of routes to a world title."

His name continues to be thrown around by many as the middleweight division continues to be stacked domestically including Liam Williams and Saunders who have called Eubank Jr out.

But another fighter who has called for Eubank Jr's name is WBC silver champion Sam Eggington, who has now set out the terms for a fight to take place between the pair.

“The Eubank fight was offered to me, there just wasn’t enough money there,” he said.

“It was not long after my last fight. They offered us a purse, we asked for a bit more and they didn’t even come back, so they must have had someone else lined up who was cheaper.

“He’s a big middleweight, super-middle sometimes, and I just wanted the money to be worth the fight, but they didn’t come back to us.

Previous : Third wave of Covid-19 in the UK: What the latest numbers from the pandemic are
Next : Chris Eubank Jr makes bold prediction for Anthony Joshua’s clash with Oleksandr Usyk