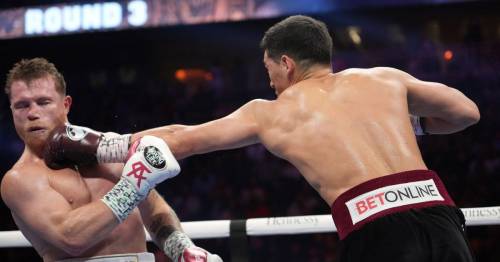 Canelo Alvarez came tantalisingly close to defeating Dmitry Bivol on the judges scorecards with the fight scored level until the penultimate round.

The Mexican suffered the second defeat of his career having been largely outboxed by the slick Russian throughout the contest at the T-Mobile Arena in Las Vegas. Bivol was handed the unanimous decision victory with Tim Cheatham, Dave Moretti, and Steve Weisfeld scoring the bout at 115-113 in favour of the champion.

However, despite consensus from fans and experts suggesting the margin of defeat was much greater, Alvarez came close to being handed victory. The Mexican was judged to be winning the fight on all three scorecards after the ninth round by a margin of 86-85.

After four rounds of the fight, Alvarez was judged to have been ahead by a score of 40-36 on all three scorecards despite most acknowledging his difficult start to proceedings. Bivol was also required to win the final round in the eyes of the three officials to prevent a draw despite having a hugely successful spell in the latter stages of the contest.

If the Mexican had scored a final round knockdown, he would have been crowned champion despite having looked extremely fatigued in the closing stages as he struggled to come to terms with the Russian's display. Alvarez showed a bullish defiance after the fight claiming he did enough to get his hand raised despite his struggles after making a leap in weight.

"I won the fight," Alvarez said through an interpreter at the post-fight press conference. "I think perhaps, maybe, I lost four or five rounds. But I definitely didn't lose the fight. I think I got a little bit tired towards the final rounds. But I felt good. I don't feel like I lost the fight.

What do you make of the judges scorecards for Canelo Alvarez's defeat to Dmitry Bivol? Let us know in the comment section below

"Maybe some rounds. Maybe the weight was a slight issue. It made me not feel 100 percent during the fight. He's a great champion, sometimes in boxing, you win. Sometimes you lose. Not making excuses. I lost today and he won. He's a really good fighter. He's a fighter that comes in and comes out. I also felt his power. I think it was good fight. I felt like I maybe did enough to win the fight but that's boxing."

The champion was delighted having retained his crown and admitted he felt the Mexican's power despite cruising to victory. "I'm sorry I broke your plans with Gennady Golovkin, maybe," he said after the fight. "Thank you Canelo and his team. He's a great champion and I respect him. I respect all his team.

"If you don't believe in yourself, what do you do? You'll achieve nothing. I believed. My team believed me. And you all should believe in yourself to achieve what you want. He beat my arm up, but not my head, which is better. He has good speed, good power."