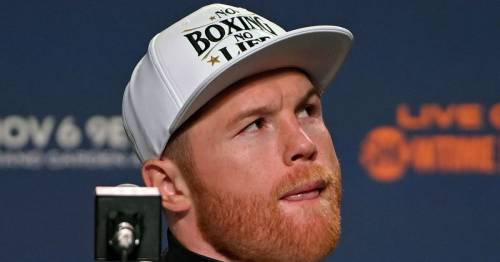 Canelo Alvarez has admitted he is unlikely to move up to heavyweight in a bid to meet champion Tyson Fury.

He will next face a huge switch to cruiserweight to face WBC champion Ilunga Makabu which has been officially sanctioned by the organisation.

But he does not believe his body will allow another jump to the blue-ribbon division to face Fury, despite refusing to rule it out entirely on the instruction of trainer Eddy Reynoso.

Canelo Alvarez is unlikely to jump up to heavyweight
(

Alvarez has reigned as a world champion in four different weight classes ranging from super-welterweight to light-heavyweight.

His biggest weight jump led him to face Sergey Kovalev back in 2019 at 178lbs where he became world champion after rallying to a late stoppage victory.

He then unified the entire 168lb division in a year with victories over Callum Smith and Billy Joe Saunders before he stopped Plant.

Matchroom Boxing promoter Eddie Hearn previously stated that he believes Alvarez could take on a "smaller" heavyweight such as Oleksandr Usyk.

I think with Canelo and Eddie Reynoso, they want challenges," Hearn told iFL TV. "They want to dare to be great which is tremendous for the sport.

“The Makabu fight is a cruiserweight fight that would give him another world championship victory, would get a lot of people talking as it did last night, and I think it’s a good option for him.

“Listen, he could move up and fight at heavyweight. I mean, Usyk’s not a massive heavyweight, Trevor Bryan is a world champion as well. Can he compete against those guys?

Could Canelo Alvarez defy the odds and make a switch to heavyweight? Let us know your thoughts in the comments section below

“Cruiserweight first, maybe. But I like the fight against Makabu. I think it’s a dangerous fight, I think it’s an exciting fight and as I said, Saul and Eddy are interested in making history.

“They’re not interested in having normal, boring fights. Every fight has to mean something.”

Fury is currently the reigning heavyweight champion and has remained undefeated after a second victory over Deontay Wilder last month.

He is expected to be mandated to face domestic rival Dillian Whyte by the WBC, but the order is currently on hold while a legal dispute is resolved between Whyte and the organisation.

And although he has hinted at hanging up his gloves, Fury has demanded a guaranteed return to the ring early next year by making an ultimatum to his promoters.

Previous : Woman, 21, shocked to hear she has lung tumour after struggling with bad cough
Next : Joe Joyce will accept February fight with Tyson Fury amid Dillian Whyte delay