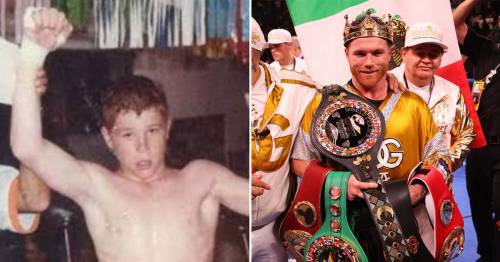 Canelo Alvarez earned just $40 for his boxing debut against Abraham Gonzalez in 2005 – but will take home $53m from tonight's clash with Dmitry Bivol.

Alvarez will make his latest boxing outing at the T-Mobile Arena in Las Vegas as he looks to become two-time 175lb champion. The Mexican is considered the sport's leading star and banked an incredible $81m for his fighting exploits last year.

However hefty purses and huge commercial revenue has not always been the norm for Alvarez, with the pound-for-pound king earning just $40 for his professional boxing debut against Gonzalez in 2005. He blasted out his rival in the fourth round of the event which took place at a small venue in Mexico.

Fans chanted the famous 'Canelo' name in the local venue which signalled the start of his journey to becoming one of the most popular fighters in the sport's history. Tonight, Alvarez will fight for the WBA light-heavyweight title after signing a two-fight deal with Matchroom which also includes the possibility of a lucrative trilogy clash with Gennady Golovkin in September.

Alvarez's first big payday came when he earned his first seven-figure payday against Shane Mosley. The Mexican then consistently earned $1m purses including against Joselito Lopez.

His first bumper outing came against boxing legend Floyd Mayweather where he earned $12m despite being handed his first career defeat. Further lucrative paydays came against the likes of Miguel Cotto earning $5m before he earned an incredible $25m for his duel with Briton Amir Khan.

What is your favourite fight of Canelo Alvarez's boxing career so far? Let us know in the comments section below

However his most rewarding fights came against Golovkin, who he earned a combined $70m against over the two epic battles with a plan to renew their rivalry for a third time this year. Alvarez signed a $365 million deal with streaming service DAZN to broadcast his fights globally which included fights against Sergey Kovalev and Daniel Jacobs.

However he later filed a lawsuit and backed out of the deal after becoming unhappy with the calibre of opponents suggested by the broadcaster. The Mexican later returned to the station after Matchroom's global launch, fighting Callum Smith, Avni Yildirim and Billy Joe Saunders to earn a combined $70m from the three fights despite the financial constraints of the coronavirus pandemic.

His most recent bout sold around 800,000 pay-per-views when he defeated Caleb Plant for the undisputed super-middleweight crowns, earning him an payday of around $45m. Alvarez is only just hitting the prime years of his career and is expected to earn many more big-money purses. Lucrative fights such as a crossover bout with Kamaru Usman and a potential trilogy with Golovkin will likely provide further record paydays for the pound-for-pound king.