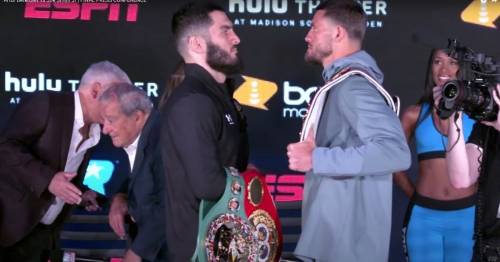 Artur Beterbiev looks to continue his flawless unbeaten run tonight as he puts his WBC and IBF light-heavyweight belts on the line against WBO champion Joe Smith Jr.

Light-heavyweight wrecking machine Beterbiev has 17 fights and 17 knockouts, retaining his titles last December with a ninth-round KO against Marcus Browne. He looks to make it 18 in 18 tonight against Smith, who has held the WBO belt since last April.

Smith has won four fights since his 2019 loss to Dmitry Bivol, who become one of the pound-for-pound best boxers in the world last month when he beat Canelo Alvarez. Smith defended his world title for the first time earlier this year by knocking out Steve Geffrard.

What time are the fights on?

Ring walks for the main event are expected to take place at around 4.30am in the UK with the undercard beginning at 2am.

All fight times are subject to change with the undercard fights possibly altering the schedule based on how quickly they are finished.

How to watch via TV and live stream

The event will be broadcast on Sky Sports Main Event and Sky Sports Action from 2am, meaning the fights will be free to watch for Sky Sports customers.

The fights can also be streamed via Sky Go on your mobile, tablet or desktop computer

Who wins tonight – Artur Beterbiev or Joe Smith Jr? Let us know in the comments section below

Artur Beterbiev : "It's very important fight for me but I'm more focused on my opponent instead of the venue. I always ask my conditioning and boxing coach, how do you think I'm doing compared to two years ago and they tell me I'm doing better.

"This camp has been very good I think, compared to my last one. I want to thank my team and coaches, sparring partners who have helped me during this camp, it's been a good one."

Joe Smith Jr : "This is a huge opportunity, Beterbiev is a huge name in boxing. Everybody knows who he is at this point, he has two world titles and I want this belt. I think this fight is going to be great, we've got two big punchers and like I said he is a big name.

"I'm fighting at Madison Square Garden, close to home. All my fans are going to be here to support me and if not from here, I'm glad to be here defending my WBO and unifying two other belts."