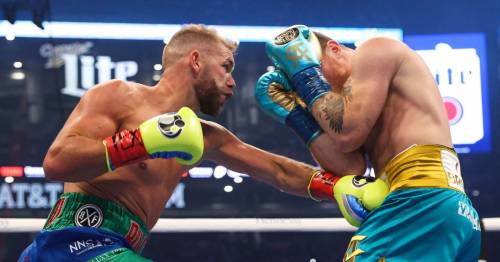 Billy Joe Saunders is leaving his future in his dad's hands as he weighs up retirement following his defeat by Canelo Alvarez.

Britain's Saunders suffered the first loss of his professional career against Mexican superstar Alvarez last month as his trainer, Mark Tibbs, threw in the towel after the eighth round.

The 31-year-old suffered multiple fractures to his cheek and eye socket after a barrage of punches, with Alvarez adding the WBO strap to his WBA and WBC super-middleweight titles.

Saunders' 31-fight career has spanned over 12 years and two championship reigns, but he admits he is considering hanging up his gloves after earning a reported £5.5million from his latest fight.

He told talkSPORT : “At the end of the day, I’m 31 years old, if I don’t ever wanna work again, wanna sit back, wanna chill, I can do that.

“And so it should be, I’ve put a lot of time into boxing and I’ve paid my dues. The sport’s been very, very good to me…

“I’m 31, I haven’t took no punishment, I haven’t been battered from pillar to post, brain dead and can’t put a sentence together, so I need to sit back and look at my options.

“Because the options have to weigh up – the thought of me just coming in and fighting for a world rating or something, belts don’t feed the kids.

“Everything would have to stack up and [be] the right fight. Because coming down from fights like that, it’s very hard, where do you go from there?

“I’ll have a chat with my dad because he’ll have a big say in it. To be fair it will be more or less down to my dad in the conversation more than me if I’m honest.

Is there an ideal next opponent for Saunders, or should he retire? Have your say in the comments.

“It’s one of them where it’s 50/50. Whether I think, I will have one more or a couple more, but they’ve gotta be the right sort of fights.

Saunders' latest update on his future appears far more uncertain than the defiant message he issued in the wake of his defeat.

Following surgery on his facial injuries, he wrote on Facebook : “Thanks everyone for msg. Broken eye socket and cheek bone in 3 places operation yesterday all went well.

“You win some and lose some, didn’t feel out my league but got caught with a good shot and couldn’t see and Ben (Davison) got the Conner [sic – corner] to pull it.

“Thank you all who watched I’ll be back god bless you all.”