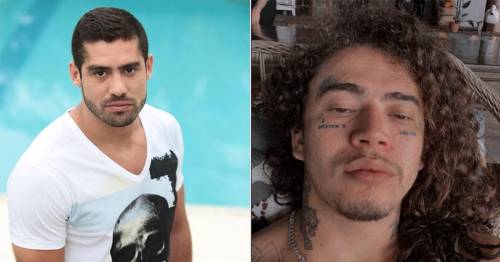 Crossover bouts have been growing in recent years with the largest created between UFC star Conor McGregor and Floyd Mayweather back in 2017 which attracted over 4 million pay-per-view buys.

Brazilian reality star Yuri Fernandes will fight on the card
(

Freitas also reigned as a two-time lightweight champion but has since hung up his gloves up from the sport and was elected as a legislator for the state of Bahia in a switch to politics.

The celebrity star has been around the block in reality TV series' in Brazil featuring on the 12th edition of Big Brother in addition to A Fazenda: Nova Chance.

Meanwhile Falcao has been in professional boxing since 2011 and will be known for his recent victory on American shores over Patrice Volny on a Top Rank promoted card.

Former MMA star Antonio Rogerio Nogueira will also make his boxing return when he faces fellow UFC veteran Leonardo Guimaraes in a 220lb duel which will likely draw the most attention as the co main-event.

'Minotouro' has previously competed in boxing events during the early stages of his career and will make the return to the iron square after retiring from MMA in July 2020 after a defeat to Mauricio Rua at a UFC show in Dubai.

Do you agree with crossover bouts between MMA and boxing stars? Let us know in the comments section below

The CEO of the promotion Mama Brito has confirmed that the event will take place on January 30 in Balneario Camburiu and will also feature "pocket shows".

“Their project was nice, the return of Mike Tyson was also cool,” Brito told MMA Fighting. “We can bring back athletes that in theory were going to retire, like Rogerio ‘Minotouro.'

"And for my next event I’m already negotiating with Wanderlei Silva. I’m going after fighters that are idols of an entire generation and everybody wants to watch them fight live.”

The event will air on pay-per-view in Brazil with Brito hoping the event will generate over 200,000 buys with some of the proceeds being invested back into amateur fighting in the country.

Three MMA bouts will also feature on the card and have made the event official with further cards planned later in the year.