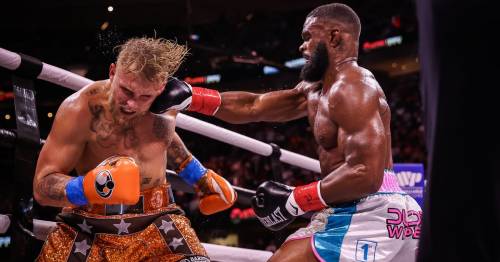 Paul added another victory to his professional record when he prevailed by a narrow split-decision against Woodley in August.

And while Askren praised Paul's boxing technique, he insists Woodley's superior striking skills should have earned him victory.

“Obviously I am biased but I thought Tyron won the fight and I had him at five rounds to three,” Askren told Lex Clips.

“I thought he was more effective with his striking and more aggressive in his approach but that Jake had more volume.

“People just didn’t see it that way and though Paul landed more punches but I just don’t think they did any damage.

"I knew that Tyron was a lot better in boxing than I was. And so I thought that there is a good likelihood that Tyron beats him up but there is a chance that Jake is kind of good at this.

"I think what played out is he's kind of good at it. And if you saw the way I saw it, he was still impressive in his showing and he has obviously put a lot of time into it. So, he's not bad, I'll say that much."

Despite Askren's verdict the punch stats showed after the fight that Paul threw far more scoring punches and out-landed his opponent by 71-52.

Although the pair immediately agreed to a rematch in the ring afterwards providing Woodley fulfilled his end of their pre-fight tattoo bet.

But after getting his finger inked and demanding a second meeting, Paul had already entered negotiations to face British star Tommy Fury.

And the younger brother of heavyweight champion Tyson should be Paul's hardest test to date, having won all seven of his professional outings with a natural background in boxing.

Who did you think won the fight- Jake Paul or Tyron Woodley? Let us know in the comments section below

His outings have been against limited opposition but the 22-year-old has vowed to up his level in a bid to end the American's short fighting career.

He is currently being trained by Tyson in Morecambe before flying out to Florida next month.

And former two-weight world champion Paulie Malginaggi believes that Fury will use his brother Tyson as the "ace up his sleeve" to defeat Paul.

"I'm actually hearing a lot of people in the US picking Tommy Fury. He's got an ace up his sleeve, he's got his brother Tyson," Malignaggi told Boxing Social.

"I've seen some videos and stuff. He's helping him train and he's involved in camp. Jake has a lot to work on, so does Tommy but I think Tommy has a big motivation in having Tyson with him.

"Jake doesn't have any dumbies around him either. BJ Flores is a smart guy, he'll have him ready as well. But I think it's a legitimate 50/50 fight."