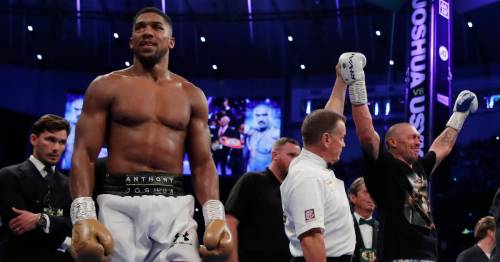 The British star lost his unified titles after being outpointed by the Ukrainian last year before immediately activating his contracted clause to a second meeting. Delays have repeatedly hit the announcement of the sequel after Usyk was unable to meet the original planned date in April after taking up arms to defend his native Ukraine against Russian invasion.

However, the rescheduled clash will now be staged in Jeddah later this summer with Joshua finally handed his chance at redemption. He will attempt to repeat his rematch victory over Andy Ruiz Jr in the same country in 2019.

The fight is being marketed as the 'Rage on the Red Sea' and will see Usyk attempt to defend the titles he won against Joshua. Usyk said: “I have a goal, with the help of the Lord I will complete my mission!”

“Fighting championship level back to back has had its pros and cons, but I decide every day to get stronger, to learn from my experiences and grow. A happy fighter is a dangerous fighter and I am the happiest and most motivated I have been.

“Thank you to the organisers, to 258MGT, Matchroom Boxing and to all the boxing fans across the world, with a special shout out to the Ukrainian fans who have been through a really tough time.”

Joshua's promoter, Eddie Hearn, said: “We are thrilled to get one of the biggest Heavyweight rematches in boxing history made and give Anthony Joshua the chance to reclaim what he lost in London last September. Everything is on the line for this Unified World Heavyweight Championship bout and it could not be a bigger contest.

"We know Oleksandr Usyk is a great fighter and we saw that last time out, but I know Anthony Joshua is more determined than ever. It was a huge success to host Anthony Joshua’s contest with Andy Ruiz Jr. in The Kingdom of Saudi Arabia in 2019 and we are looking forward to working with the country again to stage this historic event. So, no doubt all eyes of the world will be on the ring come Saturday August 20th. This is a story of redemption, and the countdown starts now.”

Who do you think will win the second fight – Anthony Joshua or Oleksandr Usyk? Let us know in the comments section below

Anthony Joshua will look for revenge against Oleksandr Usyk this summer
(

It has been reported that the nation has forked out an incredible £90million to take the rematch to Middle East, with Usyk keen to take the fight to the most lucrative destination despite the possibility of a London return. Joshua raked in an incredible £65m for his previous exploit in the Arabian peninsula, and both men could be set to earn up to £100m for the second meeting.

Hearn previously confirmed the heavyweight star wanted to return and take home advantage into any rekindled rivalry. “We would like it in England because it’s a must-win for AJ and it’s always an advantage to have that home advantage, but one of the issues is it’s a financial split," Hearn said before the venue was agreed.

"And obviously, Team Usyk is going to want as much money as they can for that fight. So we have to look at the other options and there is a lot more money to do the fight elsewhere. If we had our way, London would be the choice because it’s an important fight for AJ to win obviously."

Joshua was outboxed by a tremendous display from his rival who had cashed in on his mandatory challenge after just two fights in the heavyweight division. Joshua later came under heavy fire for his tactical approach with his trainer Rob McCracken taking criticism for his corner instructions.

The British star will now be under the guidance of new coach Robert Garcia who has been drafted in to put together a gameplan. Joshua had toured several American gyms, visiting the likes of Eddy Reynoso and Virgil Hunter in search of an addition to his training team before opting for Garcia.