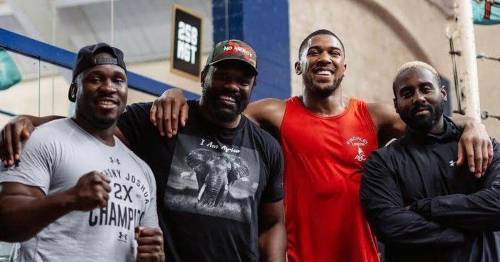 Chisora had been managed by former opponent and rival David Haye since 2018 but the pair's unlikely partnership came to an end in July after Chisora dropped fights to Joseph Parker and Oleksandr Usyk.

In the search of something new in his boxing career, he becomes the latest British fighter to partner with 258 MGT.

Brits Campbell Hatton, Lawrence Okolie and Joshua Buatsi are just a few of the other fighters 258 MGT manage.

And of the announcement, Chisora shared a message to his fans on social media.

He said: “The game is still the same just with the new management team. Looking forward to doing good business with 258. War Chisora!”

Chisora with his new management team
(

Freddie Cunningham, the managing director of 258 MGT, said of the new signing: “Derek has vast experience of the game and has seen the whole industry from the front-line.

“We are just really happy with all that experience. He feels the 258 team can add to what he is doing. We are excited to get going and looking to negotiate and build up to big fights before the year is out.”

Chisora is hoping to secure a rematch with Parker after his controversial split decision loss to the former WBO champion in May.

The 37-year-old is without a win since knocking out David Price in October 2019.

And 258 MGT's chief operating officer David Ghansa said: "The partnership with Derek, his team and 258 is not one out of the blue, we have known each other for 20 years now.

"From inside the gym to outside we have been connected and always looked to help each other where we can. We are all really excited to formalise a working relationship, work with his existing team and create new opportunities for him."

Who should Chisora fight next? Let us know in the comments section below

Joshua is set to defend his WBO, WBA, IBF and IBO heavyweight titles against Usyk on September 25.

Chisora – who went twelve rounds with Usyk last October – helped Joshua prepare for his rematch against Andy Ruiz Jr in 2019, a fight that saw Joshua win back his heavyweight titles after losing them to Ruiz earlier that year.

And Joshua recently weighed in on his fight with Usyk, ranking him as the second best opponent he has ever faced.

He said : "On paper he sits No.2, behind Wladimir Klitschko.

"They're very different technically, but on paper he's an Olympic gold medalist, he reigned for over 10 years, he's No.1.

"But Usyk is No.2 because of his success at cruiserweight and then his success so far at heavyweight."