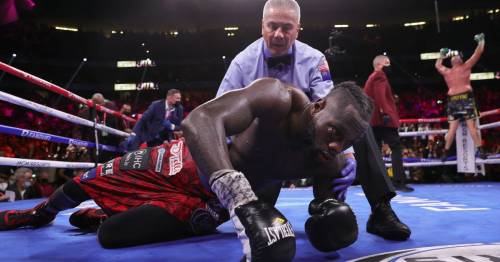 Anthony Joshua believes Deontay Wilder's fate was sealed before he entered the ring against Tyson Fury due to his lack of boxing intelligence.

Wilder was beaten for a second time by Fury in a modern-era classic despite the American scoring two knockdowns of his own in the contest.

He now faces an uncertain future being left with a broken hand which will see him out of action until the middle stages of 2022.

But heavyweight rival Joshua believes he needed to use his brain more to try and outwork Fury who was in the ascendency for large parts of the fight.

“He tried, but to get that power and that ferociousness, you have to have it up here [points to his head],” Joshua said during a JD Sports round table.

“Before you have it just here [clenches fists] at that level, you have to have it here [points to his head] as well. Not in this day and age [can heavyweights jab for 12 rounds] because heavyweights are different.

“I met the guy who makes gloves the other day, and he said that they never used to have to make special gloves. But now heavyweights are 17 to 19 stone and six-foot ten. The whole division is changed in the last, like, five years.

“And before, fighters could jab like that for 12 rounds and get away with it. They’d get a bit tired, but they were conditioned because they were lighter.

Fury was in trouble when he was dropped in the fourth round but he rallied to a penultimate-round stoppage to make history and conclude the trilogy.

The winner of the fight looked set to face Joshua in an undisputed tilt but the British star now faces a revenge mission against Oleksandr Usyk next year after losing his belts.

Meanwhile Wilder has been having 2am phone calls with his trainer Malik Scott in a desperate attempt to begin his resurgent path to a heavyweight world title shot.

His broken hand injury was corrected by surgery immediately after his defeat and he is planning to have a tune-up fight in April or May next year.

Who do you think would win- Anthony Joshua or Deontay Wilder? Let us know in the comments section below

This could set up a title fight which Wilder's manager Shelly Finkel has confirmed could well be against Joshua if the opportunity arises once again.

“My gut says the big fights. It’s not on the drawing board now, but he would love to get Fury back again," Wilder's co-manager Finkel told SunSport. “But again, it’s early and we have to get through Usyk and Joshua and see a couple of other possibilities.

Previous : Doctor caught half-naked with patient telling her having sex with him will cure her – World News
Next : Tommy Fury “looked terrible on purpose” in order to secure Jake Paul fight