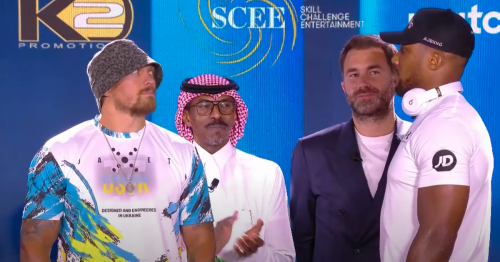 Anthony Joshua and Oleksandr Usyk finally went head-to-head this afternoon after almost a year of negotiations for their world title rematch.

Usyk relieved Joshua of his unified heavyweight belts for the second time in the Brit's career back in September, taking a comfortable decision victory at Tottenham Hotspur Stadium in London. But he was forced into accepting an immediate rematch due to a contractual clause, which has finally been set for August 20 in Jeddah, Saudi Arabia.

There were plans for the pair to meet earlier in the year, but things were complicated when Usyk's home country of Ukraine was ravaged by Russia's invasion. And he was unable to leave for months while he fought on the front lines before eventually jetting out to prepare for the world title rematch.

And finally after 10 months apart, Joshua and Usyk were brought back to the same room this afternoon for the fight's launch press conference. Promoter Eddie Hearn and Saudi officials joined the pair on stage as they discussed the upcoming bout as well as Alex Krassyuk and Egis Klimas.

"I want to say God is good all the time, even through tough times," Joshua said. "Definitely the hunger is still there, as I always said from the get-go, stay hungry.

"Just keep the motivation high, blips happen, things happen in life but resilience, mental toughness and consistency will always prevail so we're still on the road to undisputed for sure. It's just a little blip on the road but I'm focused on the target which is sitting over there, focused on the goal and God-willing I will perform and become three-time heavyweight champion."

Usyk cut his usual stoic figure, and opted to speak in English as opposed to through a translator for the early part. He said: "Hello everybody, I'm very happy I am here and I am very happy for my next fight in Saudi Arabia.

"As we all know we are not in the best conditions at the moment back at home, but we are doing what we have to do, we are doing our job. Together with my team we are working hard to achieve our goals.

"I never made some very loud and bright speeches, all I did was just work hard in my training camp in my gym. That's what I'm going to do until the date of the fight, and then I will enter the ring and make you happy with my boxing."

Matchroom Boxing boss Hearn added: "We want to thank everybody for their patience, it's been a long time making this fight but when there's a fight of this size, coming and putting on a production like we want to put on, these things take time.

"Thank you to Egis and Alex and Oleksandr Usyk, as well as our team Anthony Joshua, 258 Management and Robert Garcia. This is all very nice, very friendly, but we're only here to win.

Who do you think wins the rematch; Anthony Joshua or Oleksandr Usyk? Let us know your thoughts in the comments section below!

"Honestly, that's all that matters, last September was very painful when the great Oleksandr Usyk dethroned Anthony Joshua. We're here to be pleasant, but we're here to see this man regain those wonderful belts up there on August 20."

Usyk has never fought in Saudi Arabia, while the country played host to one of Joshua's great achievements when he reclaimed his belts from Andy Ruiz Jr in 2019. There is controversy around the bout being held in Jeddah, but promoter Eddie Hearn has insisted that the financial offer was too good to turn down.

The pair will return to London for a press conference next Wednesday. The bout takes place at the Jeddah Superdome, which has been known to have a capacity as high as 40,000.