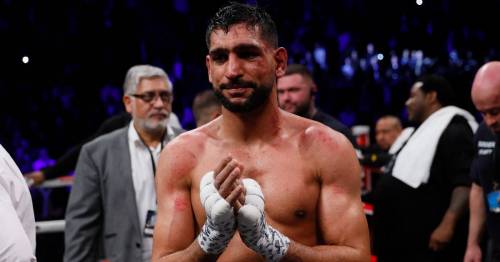 Amir Khan has announced his retirement from boxing at the age of 35 after losing to bitter rival Kell Brook earlier this year.

The British star returned to the ring for the first time since 2019 in a hugely successful event against Brook back in February. However he was outclassed on the night by a scintillating display from his rival, which led to huge question marks over the future of his iron square career.

Now Khan has finally closed a chapter on his 27 years in the sport, tweeting: "It’s time to hang up my gloves. I feel blessed to have had such an amazing career that has spanned over 27 years. I want to say a heartfelt thanks and to the incredible teams I have worked with and to my family, friends and fans for the love and support they have shown me."

Khan has had a hugely successful career in the sport having shared the ring with the likes of Canelo Alvarez and Terence Crawford throughout his career. The British star also reigned as unified world light-welterweight champion in addition to having won belts at Commonwealth and domestic level.

He recently announced his return to the ring against Brook ending a wait of around seven years to finally settle his rivalry with Brook as both claimed to be the best welterweight in the world. However after months of gruelling training, Khan saw himself comprehensively dismantled by Brook and was stopped in the sixth round despite a brave performance.

Khan had hinted at retirement shortly after the defeat, admitting he had fallen out of love with the sport. “I've had 40 fights, winning two world titles, fighting in America and around the world," he said. “I need to sit down with my family. But it is more towards the end of my career.

What is your favourite memory of Amir Khan's glittering career? Let us know in the comments section below

"The love for the sport isn't there anymore. In the ring, I didn't have excitement and that push. That's maybe a sign that I should call it a day but let's see. He was the best man tonight. I had a great, great training camp, but I just couldn't get going.

Khan began his career with Olympic silver medal glory at the 2004 Athens Games, before turning professional a year later. The former world champion ends his time in the professional ranks with a record of 34 wins and six losses.

He lit up the ring with his super fast hands and agile frame throughout his career, as well as amassing a huge fanbase across the globe and in his hometown Bolton. He burst onto the scene as a professional beating several domestic rivals before requiring to bounce back from his first defeat to Breidis Prescott.

He later became world champion at the age of 22 in a historic night in Manchester, with Khan now following his rival Brook into retirement after their battle earlier this year.