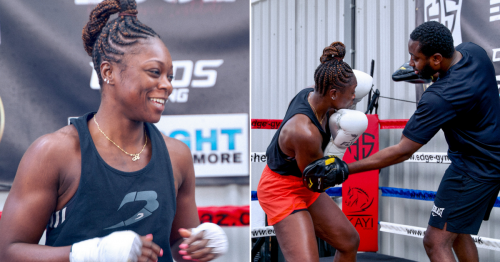 Boxer Sedem Ama knows what it’s like to burn out.

The two-time national amateur boxing champion has always dealt with pressure growing up but she has also fallen into the trap of letting work dictate her life. In a demanding industry – the world of public relations – she was waking up early, working flat out, and getting home late. There was very little time outside of that to actually take time for herself and live.

With Mental Health Awareness Week currently ongoing in the UK, the boxer has been forced to find balance in her life so that her mental health is in a more positive state. Much of that has been easier said than done but her discovery of boxing, and taking her participation in the sport to new heights, has also aided with her own self-care.

With the pandemic, cost of living and other worldwide events doing undoubted harm to people’s mental health, Ama’s life lessons could well be something that someone else benefits from.

“I was practising as a journalist when I graduated uni and was working at big places just to put on my CV, so that was great,” says Ama talking about the early stages of her career. "I realised very quickly that I wanted something a bit more creative so I went into public relations and it just took over my life to be honest.

“It was entertaining clients, deadlines, and I realised that all I was doing every day was waking up early and getting home late and there was no balance. The pivot happened when my colleagues and I realised we needed something positive to be doing and, at the time, the company really encouraged going out for runs at lunchtime.

“They wanted us to be able to have a balance too because you get more out of your staff if you encourage that. We ended up in a gym and I took up boxing as a hobby, that’s where the pivot happened.

“I realised this was really beneficial for my mental health and physical health. When you start seeing physical changes in both of those respects then you know you have to keep pushing forward, I just took it a bit too far!”

Sedem Ama's faith is incredibly important to her and her wellbeing
(

Having grown up in Peckham, an admittedly tough London neighbourhood, Ama has been used to pressure thanks to her upbringing. Her father, a Reverend, instilled strong Christian values into the household but that, along with her discovery of boxing, has helped her get into a more positive state of mind.

“I was really good at it [boxing] and I enjoyed the endorphins after training, going home and sleeping well,” she continued. “I decided that was something I wanted to pursue.

“It was harder in the pandemic because I was literally getting ready for a national competition. They announced the lockdown on the Tuesday and I was competing on the Friday. It was really challenging for a lot of sportspeople – everything just gets ripped up from under you and you don’t know how long it’s going to last for.

“That definitely took a toll on my mental health because I was in the best possible position, I was performing very well in the gym, but that wasn’t to be. So having a balance, and knowing that anything can happen at any time. Just being able to adapt was something that I learned over the past four or five years that I’ve been in boxing for sure.”

“Having faith helps me through those moments”

Sedem Ama found boxing after suffering from burnout in her job
(

Chatting with Ama, it’s evidently clear how important faith is to her. Not only is it a source of comfort but it’s a source of strength and drive. That can be a very powerful tool to have at your disposal when you’re trying to get your mental health into a more positive state.

“I am very thankful for waking up every day, those are the things I think about,” she said. “My faith definitely helps me navigate through life and I know that you don’t have to be particularly religious to accept a higher power – everyone believes in different things – but, for me, being spiritual helps get me through the day and helps me do the things I need to do, whether it be work or in training. My faith is what has driven me and gotten me this far.

“If you think about it, the position I am – in my job – I am very senior, I have a lot of responsibility, so sometimes it can be lonely. Also I’m an athlete in a sport where it’s an individual sport. When you get in the ring it is literally you and your opponent, so that can be a lonely place, regardless of how you have prepared. Having faith helps me through those moments.”

Sedem Ama has been used to pressure thanks to her upbringing
(

Loneliness is arguably something a lot of us will be able to relate to considering the events of the last two years. It’s why the theme of this year’s Mental Health Awareness Week is just that, with the problem exacerbated by the pandemic. Loneliness is an important factor in contributing to higher levels of distress, resulting from people’s sense of isolation and the reduced ability to connect with others.

“You try to manage it as best as you can,” Ama added. “Even though you do have lonely moments you’re actually not alone.

“I never ever feel alone because I’ve got my faith, I’ve got my colleagues, I’ve got my friends at training, I’ve got my family, so I never feel like I’m alone but you obviously will have those moments in life where you do think by yourself, so the loneliness does creep in.”

For many, sport has proved to be an amazing tonic for mental health. Be it as a fan, or just taking part at a grassroots level, the potential is extraordinary. Ama is one person who knows that from her boxing and, while she’s driven to become the first ever British Ghanian female boxing champion, she recognises what the sport has done for her on a human level too.

“People probably separate the two [mental and physical health] but actually they go hand in hand,” she said. “I do think that sport is so important and my parents didn’t force me to do any sport. I voluntarily wanted to do everything. But those opportunities should be available. A lot of communities will have after-school clubs and you can play tennis or cricket – whatever.

“A lot of the American systems, you play college basketball and it’s like a World Championships to some people. We don’t really have that in the UK, so sport is really key. We have to find a way to give as many opportunities to young kids as possible because you don’t know how it’s going to affect them mentally, physically and, in the long run, it’s something we should look at.”