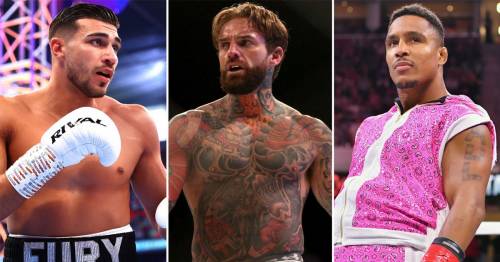 Geordie Shore star Aaron Chalmers' path to a lucrative fight with Jake Paul will have to come with big wins over Tommy Fury and Anthony Taylor.

That's according to the debuting fighter, who has been training with legendary coach Adam Booth for the last two years ahead of his professional boxing bow tomorrow night. Chalmers will finally swap the MMA cage for a boxing ring when he faces Alexander Zeledon on Wasserman Boxing's Liverpool show.

Chalmers rose to fame on reality TV before switching to MMA, where he went 5-2 including two wins in Bellator. But he quit the sport after a frustrating end to his career, and moved on to boxing, where he is hopeful of eventually working his way to an eventual bout against Paul.

"We're going to have this fight on Friday, maybe one more at the end of July and then we'll sit down with Adam," Chalmers told Mirror Fighting of his future plans in the boxing world. "We'll see what happens.

"But if it is YouTubers I want the direction to be towards Anthony Taylor and Tommy Fury. And obviously the dream fight is Jake Paul, but is it too far away? I don't know."

Brash American Taylor was a solid MMA fighter with wins over ex-UFC stars Chris Avila and Dean Barry before befriending Paul and becoming a sparring partner for the YouTuber last summer. He parlayed that friendship into a fight with Fury, which he lost over four rounds after jumping up 20lb from his last MMA fight.

But Fury was unable to stop Taylor, and Chalmers believes that putting away the California native would be enough to put the Love Island star's team on notice and set up a bout with his fellow Brit. He and Taylor have gone back-and-forth on social media in recent days, and are angling to fight on Paul's next card on August 6, which could be against Fury at Madison Square Garden.

"Anthony always messages us and asks when we're fighting," Chalmers added, noting the rivalry that has been brewing between he and Taylor since their Bellator days. "I'm like 'listen, we are going to f***ing fight'. Let me get the debut out of the way and a few fights in and then we'll have it.

Would you like to see a fight between Aaron Chalmers and Jake Paul? Let us know your thoughts in the comments section below!

"He's been chasing me since I was in MMA, but I think Tommy Fury struggled with him over four rounds, personally I do think that. But that's a fight I would f***ing love to take, I would blast his head clean off. These hands are like dynamite, these are heavy, heavy hands so yeah, I do think I would stop him."

And Chalmers at one point had the Fury fight in his grasp, but decided to wait until he had trained more and made his debut. Now, he wants to get that one going again, and feels a win over Taylor could set it up perfectly.

"Before I moved to Adam's I had signed to fight Tommy Fury," Chalmers said. "It was eight weeks notice and I was heavily drinking, out of shape and it was on some different promotion.

"Then I met Adam and it was like 'this is not a fight that makes sense', because it's my first fight. So I've put it on the back-burner but now it's something in my head that I want to have still."