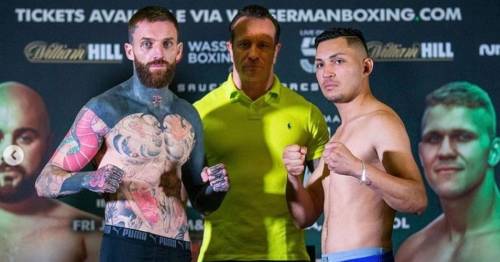 Aaron Chalmers fight live stream: How to watch online and on TV

Aaron Chalmers continues his journey in the combat sports world tonight as he makes his professional boxing debut on the undercard of a Wasserman event in Liverpool.

The Geordie Shore star has been preparing for his first fight in the ring under the tutelage of veteran coach Adam Booth for the last two years. Chalmers, who fights Alexander Zeledon in his debut, decided to make the switch to boxing after a short-lived MMA career in which he finished with a record of 5-2.

Chalmers has outlined a two-year boxing plan in which the ultimate goal is to fight YouTube star Jake Paul. Before stepping in the ring against 'The Problem Child' he will have to get through Zeledon, who has a record of 6-28-3.

Here's all you need to know about Chalmers' ring debut tonight…

How to watch on TV and via live stream

The fight is free to air for UK fight fans at 9pm on Channel 5. If you're unable to watch it live on TV, you can watch Chalmers in action by streaming his fight on the network's website player here.

What time will the fight start?

The Liverpool event begins at 9pm and Chalmers' fight is expected to get between then and 9:45pm, depending on the length of the undercard bouts scheduled before he steps in the ring.

Aaron Chalmers: "I'm excited, it's been a long time coming. I've had a few set back with injuries, but I feel like now is the right time and what better place to start than Liverpool. For the first six months of boxing, I was just jabbing. It's been 22 months in the making so come Friday night I'm excited to go and put on a show.

"I want to give this first thing out of the way before I start making plans. It's going to be a quick two years [in boxing] and I want to try and succeed, do everything I can. Let's get the ball rolling on Friday and then we will go again."