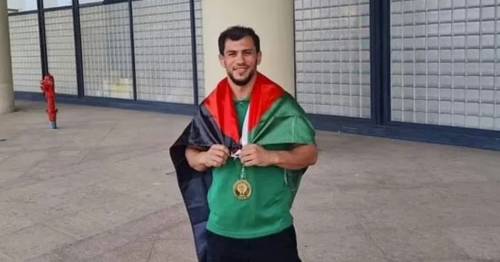 Algerian judoka Fethi Nourine has been suspended for 10 years by the International Judo Federation (IJF) after withdrawing from the 2020 Tokyo Olympics.

Nourine, 30, qualified for the men's 73kg class and was set to face Sudan’s Mohamed Abdalrasool in his first bout. Victory would have paired him with Israel’s Tohar Butbul in the next round.

However Nourine, a three time champion at the African Judo Championships, then withdrew from the event, claiming his political support for the Palestinian cause made it impossible for him to compete against Butbul.

Consequently, the Algerian Olympic Committee withdrew the accreditation of both Nourine and his coach Amar Benikhlef the pair were duly sent home from Japan and issued with temporary suspensions by the IJF.

The organisation have now confirmed the pair will be banned from all IFJ event and activities through to July 23 2031, ending any hopes Nourine had of appearing in the 2024 or 2028 games in Paris and Los Angeles respectively.

Both however, are eligible to appeal against their bans to the court of arbitration for sport.

In a released statement, the IFJ said the pair had used the games as “as a platform for protest and promotion of political and religious propaganda," which breached its code of ethics and the Olympic Charter.

This wasn't the first time Nourine had refused to face Butbul for political reasons. At the 2019 World Championships, also in Tokyo, the Algerian won his first match to set up a clash with the 27-year-old, but then withdrew himself from the competition.

Nourine's stance has not been a lone one. In April, Iran was given a four‑year ban by the IJF for “repeated and very severe breaches” of the organisation’s statutes after it put pressure on one of its fighters to not face an Israeli athlete.

Sudanese fighter Abdalrasool also opted to step down from the Olympic tournament rather than face Butbul, 27, who then received a bye into the last 16. There, he beat Moldova's Victor Sterpu before losing to South Korean An Chang-rim in the quarter-finals.

That gave the 2021 European Championship silver medalist a chance to claim a bronze medal via the repechage, but defeat to Canadian Arthur Margelidon condemned him to a seventh placed finish.

He did however, go on to claim a bronze medal with Israel in the mixed team event.

Previous : Brit tennis sensation Emma Raducanu’s incredible US Open success in numbers
Next : What happened to Michael Schumacher? Inside the life of the famous F1 driver