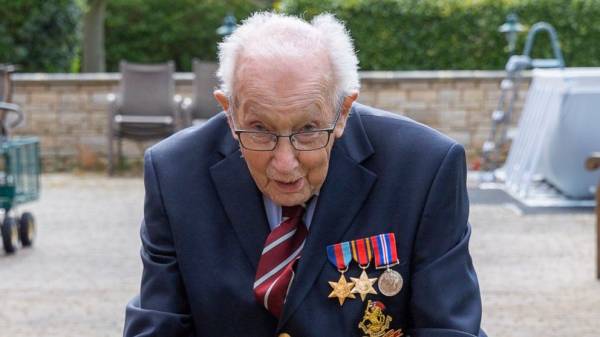 LONDON —
A 99-year-old British army veteran who started walking laps in his garden as part of a humble fundraiser for the National Health Service has surprised himself by generating millions of pounds within days.

Tom Moore’s family used social media to help him get donations to support health care workers during the coronavirus pandemic as a way to thank the doctors and nurses who took care of him when he broke his hip.

Moore, who uses a walker while putting in his paces, is well on his way to completing 100 laps of his 25-meter garden before he turns 100 on April 30.

His family thought it would be a stretch to reach the 1,000-pound fundraising goal initially set for Moore’s campaign last week. But the drive clearly captured the public mood at a time of national crisis. By Wednesday, the cause had attracted more than 250,000 supporters pledging close to 8 million pounds ($10 million.)

Celebrities, fellow veterans, health workers and many other Britons have rallied behind Moore after the World War II veteran and his family appeared on national television.

Moore said the response was “completely out of this world.”

“Thank you so much to all you people who subscribe to the National Health Service, because for every penny that we get, they deserve every one of it,” he told the BBC.

Moore trained as a civil engineer before enlisting in the army during WWII. He rose to the rank of captain and served in India and Burma.

His daughter described the flood of donations as “beyond our wildest expectations” and a gift for her father.

“Whilst he’s had a life full of purpose, he did fall and break his hip and became much less independent than he had been for the preceding 98 years,” Hannah Ingram-Moore told the BBC on Wednesday. “What you have done, the British public and everyone who’s supported him, is giving him his next purpose.”

England’s chief nursing officer, Ruth May, said Moore’s campaign showed that “everyone has something they can do to support the COVID-19 response.”

U.K. Health Secretary Matt Hancock, who spent a week in self-isolation after both he and Prime Minister Boris Johnson tested positive for the virus, gave Moore a shout-out during the government’s daily public health briefing Wednesday’.

“Captain Tom, you’re an inspiration to us all,” Hancock said.