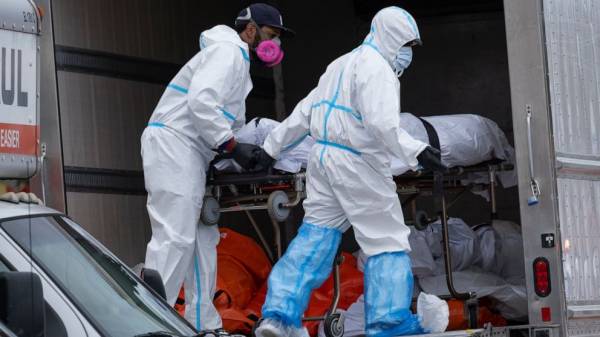 NEW YORK —
It started with reports of a strange stench in Brooklyn. Police who investigated found another example of how the cornavirus has overwhelmed the city: A funeral home had resorted to storing dozens of bodies on ice in rented trucks.

Now state officials say the funeral home could face fines and license suspensions, and the owner says he simply ran out of room because the business had bodies “coming out our ears.”

A neighboring business owner called 911 to report that fluids were leaking from one of the trucks, police said.

Health officials issued guidance to all funeral homes that they would not tolerate “any of that kind of behavior,” Zucker said at the daily coronavirus briefing by Gov. Andrew Cuomo.

“Obviously the funeral home shouldn’t have done that,” Cuomo said.

Messages were left Thursday with owner Andrew T. Cleckley, who told The New York Times on Wednesday that he needed to use the trucks for overflow storage after he had filled his chapel with more than 100 corpses.

“I ran out of space,” he said. “Bodies are coming out of our ears.”

The funeral home was initially cited for failing to control the odors before it obtained a larger, refrigerated truck later in the day. Workers in protective gear could be seen Thursday transferring bodies into the refrigerated truck.

“I have no idea in the world how any funeral home could let this happen,” the Democrat said at a news briefing. He said officials at the home should have asked state regulators or city police for help if they were getting overwhelmed.

The funeral home “should have been able to figure it out,” he said.

New York City funeral homes have struggled since late March as the number of virus-related fatalities has topped 18,000.

The city set up temporary morgues. Hospitals used refrigerated tractor-trailers to cart away multiple bodies at a time, sometimes loading them in public view on the sidewalk. Crematoriums have been backed up. Funeral directors across the city pleaded for help as they ran out of space.

Many people working at funeral homes have expressed “concerns regarding storage,” but none as extreme as those reported at the Brooklyn facility, Mike Lanotte, spokesman for the New York State Funeral Directors Association, said Thursday. Lanotte said Cleckley’s home was not a member of the group.

Worries intensified Thursday that the chaos at the Brooklyn funeral home would make it difficult for families to keep track of bodies of loved ones, Brooklyn Borough President Eric Adams said.

The pain for those families “must be unimaginable,” he said.