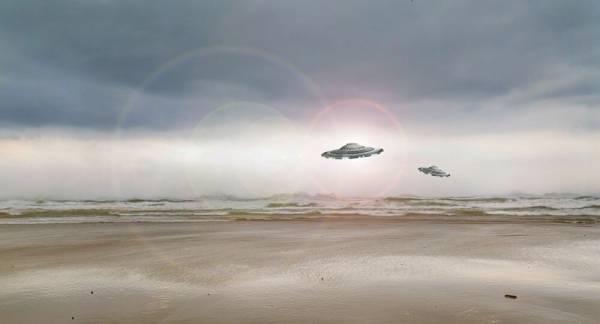 The mysterious lights were recorded days before the Pentagon officially released much-debated videos taken on board aircraft of alleged guests to Earth in order “to clear up misconceptions” about the authenticity of the circulated clips.

A strange triangle-shaped UFO is claimed to have appeared above Texas in what has been reported as the fourth such sighting in a year, according to a YouTube channel dedicated to suspicious hovering objects.

A new video from the town of Tomball has emerged showing one of the clearest sightings to date, featuring three bright “rings” slowly forming into a triangle. Hardly do they start to vanish before they re-emerge, stunning a woman behind the camera, who can be heard uttering “oh my God” before questioning what it might be.

The previous sightings of this kind in Texas – at least three of them – were dismissed as Chinese lanterns, balloons, and kites.

The Texas video comes after the Pentagon officially released intriguing footage taken by the US Navy of “Unidentified Aerial Phenomena”. The clips were recorded in 2004 and 2015 by infrared cameras on US Navy aircraft and show what the Pentagon calls “unidentified aerial phenomena”. The oblong objects appear to move through the sky in elaborate ways, while the pilots can be heard in the videos wondering about the breakneck speed they were moving at and how they managed to fly into a substantial headwind with ease.

The declassified videos have been circulating for a few years after first being reported in 2017. This week, the DoD made them officially available for download in response to a Freedom of Information Act (FOIA) request “to clear up any misconceptions by the public on whether or not the footage that has been circulating was real, or whether or not there is more to the videos”, according to Sue Gough, a DoD spokeswoman, who said that the objects in the records remain unidentified.

Previous : German Catholic Church Confesses it ‘Was Complicit’ in WWII by Not Opposing Nazi Regime
Next : How doctors are keeping patients safe as elective surgery resumes