The Latest: Singapore to let some businesses reopen May 12 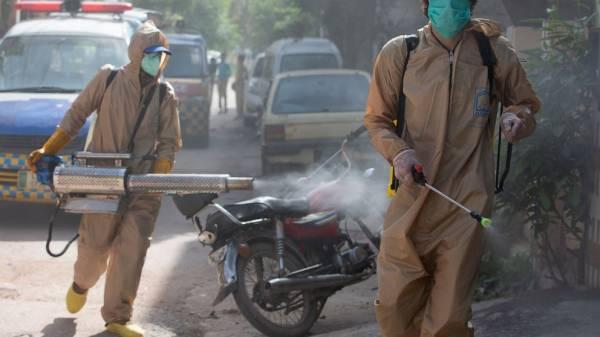 — China reports one new virus case, but no deaths

SINGAPORE — Selected businesses will be allowed to reopen from May 12 in a cautious rollback of Singapore’s two-month partial lockdown to curb the virus spread.

The city-state has seen a sharp rise in infections, with 447 new cases Saturday to take its total to 17,548. About 85 percent of its infections are linked to foreign workers living in crowded dormitories.

Despite this, the health ministry said cases in the local community has declined. It said the average daily infections in the community has dropped by more than half to 12 in the past week, while cases with unknown sources have also fallen to an average of six a day.

The ministry said restrictions will be eased cautiously and gradually to avoid a flare-up of the virus. Selected activities such as home-based businesses, food manufacturing, selected food retail outlets, laundry services, barbers and pet supplies can reopen from May 12. Small groups of students will be allowed back to school from May 19.

It said a gradual reopening of the economy and work premises will be phased in, with strict health rules including a digital mobile app to speed up contact tracing. Other lockdown measures remain, including confining more than 300,000 migrant workers in their dorms until the lockdown period ends June 1.

BEIJING — China, where the pandemic began in December, reported one new infection and no deaths in the 24 hours through midnight Friday.

The National Health Commission reported 43 people were released from hospitals Friday after being declared recovered, raising the total to 77,685. There were a total 557 people still hospitalized on the mainland.

ISLAMABAD — Pakistan recorded its highest single day increase in new COVID-19 infections with 1,297 new cases reported to bring the total in the country of 220 million people to 18,114.

The increase also coincides with a a growing number of daily tests being carried out. In the last 24 hours Pakistan conducted more than 9,000 tests, also its largest single day testing as it struggles to climb to a daily testing of 20,000 promised nearly two weeks ago by Prime Minister Imran Khan.

Even as the number of new cases increase pictures in local newspapers showed large numbers of the faithful attending some of Pakistan’s mosques with only sporadic signs of the social distancing rules imposed by the government when it refused to shut down mosques during Ramadan, Islam’s fasting month.

Khan’s government has also suggested it might ease lockdown rules governing retail shops ahead of the holiday of Eid-ul Fitr that marks the end of Ramadan, later this month.

Doctors in several parts of the country, however, have pleaded for stricter lockdowns, warning an explosion of infections would overwhelm the country’s struggling health care facilities that count barely 3,000 intensive care beds countrywide.

SANTA FE, N.M. — A modern trading post on the southern outskirts of the Navajo Nation was on lockdown over the weekend under the watch of National Guard troops and state police to discourage nonessential travel and commerce as local coronavirus infections soar.

Invoking provisions of the state Riot Control Act, New Mexico Gov. Michelle Lujan Grisham ordered residents of Gallup to remain home except for emergencies and blocked roads leading in and out of town to nonessential travel and any vehicles carrying more than two people.

The restrictions were welcomed by local and state officials who have watched COVID-19 infections spread to nursing homes and homeless populations as well as overwhelm hospital intensive care units, leading coronavirus patients to be transferred to Albuquerque.

Some visitors were caught off guard as they traveled from the Navajo Nation to stack up on supplies, only to find entire sections of the Gallup Walmart cordoned off as sales were restricted to food and other essential commodities.

“They didn’t tell us on the radio or anything,” said Patrick Sandoval of Ganado, Arizona, who came in search of food, games, baby wipes and other items for his family and neighbors. “You don’t find out until you get in there that it’s just essential items.”

LOS ANGELES — Oprah Winfrey keeps updated with the coronavirus news, but she has often focused her attention more on the positive “acts of valor” while being on lockdown during the pandemic.

The media mogul said Friday evening that she wants people to digest daily information wisely during the Call to Unite 24-hour livestream global relief event. She was among 200 star-studded participants including President Bill Clinton and Julia Roberts to take part in the event.

The event was initiated to help inspire people to endure and overcome the challenges of the coronavirus pandemic.

“I have a small diet and managed how I took in the news,” said Winfrey on Friday evening from her home, where she has been self-quarantining with three others for nearly 50 days. She said she hopes the event can help the world become better.

“If you leave it on all the time — as I know some people do — you will be consumed by the agitation, the hysteria, the confusion and constant angst that has been put into your phone, home and into your spirit,” she continued. “I have chosen to focus on so many acts of courage and valor, determination and people not giving up.”

Each participant will answer calls in their own way, whether through performing a song, sharing a story or offering a prayer.

HONOLULU — Hawaii Lt. Gov. Josh Green said Friday the state is moving into “Phase 2” of its effort against the coronavirus now that it has successfully reduced the rate of new infections and “flattened the curve.”

Green said in a video posted on social media that low-risk activities like elective medical procedures are resuming and officials in the next few weeks will consider authorizing medium-risk activities.

“Can our gyms open? Can restaurants that do social distancing open? That’s what we’re working on,” Green said.

The next step after these activities would be “higher risk stuff” like large gatherings of people and bars, he said.

On Friday, Hawaii reported one new case of COVID-19 for a cumulative total of 619. Sixteen people have died.

Gov. David Ige has extended the state’s stay-at-home order through May 31. A 14-day quarantine for travelers arriving in the state also remains in effect.

SEOUL, South Korea — South Korea has reported six fresh cases of the new coronavirus, continuing a month-long streak of below 100.

Infections continue to wane in the hardest-hit city of Daegu, where no new cases were detected.

At least 1,081 cases have been linked to international arrivals, but these cases have also declined in recent weeks as the government strengthened border controls, such as enforcing 14-day quarantines on all passengers coming from overseas.

With its caseload slowing, government officials have been relaxing social distancing guidelines and shifting focus to ease the shock on the economy. During the first three months of the year, the economy saw its worst contraction since late 2008 as the pandemic hit both domestic consumption and exports.

Health authorities still raise concern about a broader “quiet spread” and is planning antibody tests to learn how widespread the virus is.

DOVER, Del. — Protesters gathered outside Delaware’s statehouse on Friday demanding that Democratic Gov. John Carney lift restrictions he has imposed on individuals and businesses in an effort to stem the spread of the coronavirus.

More than 400 people defied Carney’s prohibition on gatherings of more than 10 people and mandates requiring social distancing and the wearing of face coverings in public. The rally was preceded by a noisy, flag-waving parade of vehicles slowly circling the capitol and Legislative Mall.

“It’s going to let him know that we’re not happy, at the very least,” said Bill Hinds of Newark. “There’s a lot of people being hurt by this lockdown. Losing their jobs, losing their businesses. … This is a life-changing event for everybody in Delaware.”

Carney said he understands people are getting frustrated, but he seemed unswayed by the protests.

OLYMPIA, Wash. — Washington Gov. Jay Inslee says he is extending the state’s coronavirus stay-at-home order through at least May 31.

The Democratic governor said Friday he will ease the restrictions in four stages, starting with allowing retail curbside pickup, automobile sales and car washes by mid-May.

There will be a minimum of three weeks between each phase, though Inslee said some counties with lower numbers of cases and deaths may be able to open parts of their economy sooner if approved by the Department of Health.

Washington state had the nation’s first confirmed COVID-19 case in January, as well as the first deadly cluster, at a Seattle-area nursing home. Inslee in March was among the first governors to issue a sweeping social-distancing mandate.

WASHINGTON — President Donald Trump says he’s hoping that the total number of COVID-19 deaths in the United States will be below 100,000.

Even that, he acknowledged on Friday, is a “horrible number.”

Trump’s predictions of the expected U.S. death toll have changed over time, and he repeatedly has used high estimates to make the case that his administration’s actions, especially his decision to restrict travel from China, have saved lives. His actions have been challenged by state, local and public health officials who have complained about shortages of testing supplies and safety gear for doctors and nurses.

At the same time, she said epidemiology models initially had predicted a worst-case scenario of 1.5 million to 2.2 million U.S. deaths without mitigation efforts such as social distancing, hand washing and staying home as much as possible.

At a White House event on Friday, Trump said “maybe millions of lives” have been saved by shutting down the economy.

McMaster’s announcement came Friday, the same day many hotels near the state beaches could reopen and state parks unlocked their gates for the first time in more than a month.

The Republican governor also said outdoor dining areas of restaurants can reopen Monday as long as they follow strict distancing requirements, restrict tables to no more than eight people and sanitize seats and tables after each customer.

Hotels in the state’s most popular tourist destination, Myrtle Beach, can only honor reservations already made before the COVID-19 pandemic until May 15. Then they can take new reservations.