The Latest: Greece: No deaths in 24 hours, ease restrictions 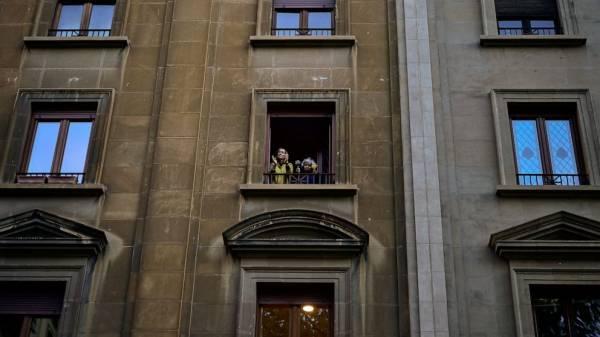 — Virus worries for workers demanding rights on May Day.

ATHENS, Greece — Greece’s health ministry announced there were no coronavirus-related deaths recorded in the last 24 hours and 21 new confirmed infections.

The total infections in Greece stand at 2,612, although authorities say the true number is likely much higher. The country’s death toll stands at 140.

Greece imposed lockdown measures early in the outbreak, a move that has been credited with keeping the number of deaths and seriously ill low. The restrictions on movement and businesses will be eased gradually, starting Monday.

NEW ORLEANS — Louisiana restaurants were adding outdoor tables 10 feet apart in a tiny step toward normalcy during the COVID-19 pandemic.

Restaurants statewide have been allowed to offer only takeout and delivery food since March 21 under an order by Gov. John Bel Edwards. But starting Friday, restaurants are allowed to seat people outside, though without waiter service at the tables.

New Orleans is not participating in the governor’s tweaks to business restrictions, which also include letting mall retailers offer curbside service.

ZAGREB, Croatia — A prominent workers’ union in Croatia held an online Labor Day protest as the lockdown against the coronavirus prevented traditional gatherings and demonstrations.

The Association of Independent Unions of Croatia gathered 100 participants via video conference for an hour and thousands more followed on social networks. The participants in the “Rights before Thank You for the Workers” event discussed worker problems and what will come after the outbreak.

The unions have sent requests to the government, including lower taxes for workers, a more just pension system, accessible education and better work conditions.

Head of the association, Mladen Novosel, expressed hope that “investment in local production and industry will become a rule” and the pandemic “become an opportunity to build a better society.”

Croatia has one of the weakest economies in the European Union.

SOFIA, Bulgaria — Bulgaria is relaxing parts of a nationwide lockdown imposed seven weeks ago to limit the spread of the coronavirus outbreak.

The announcement about the easing of the ban on outdoor activities followed a decision on lifting the requirement for compulsory wearing of face masks in open public spaces.

The new regulation says people should wear masks when in contact with others. Face masks remain mandatory for indoor public spaces, like shops and on the public transportation.

The Balkan country of 7 million has recorded 1,541 confirmed COVID-19 cases and 66 deaths.

PRAGUE — About a hundred of people who commute from the Czech Republic to Germany and Austria to work have protested the government’s restrictions imposed due to the coronavirus pandemic.

After limiting crossborder travelling for weeks, the government allowed them to commute abroad daily again on Monday.

Originally, the commuters were ordered to get tested for the coronavirus twice a month. After their initial protests, the government changed that on Thursday to one test a month.

The protesters who gathered at a Czech-German Folmava border crossing Friday say they still considered it discriminatory, especially since they must pay for the tests.

It was a rare protest in the country on May Day when traditional rallies and gatherings were canceled amid the pandemic.

HELSINKI — For May Day, Finland replaced parades and speeches with virtual reality.

Citizens turned their smartphones, tablets or computers to see the band that reportedly was Finland’s most streamed. No VR headsets were needed and people could choose an avatar of their liking to see themselves dancing in virtual reality among the participants at the gig.

“Even though we won’t be physically together, we can still enjoy May Day as a community, together in spirit,” Helsinki mayor Jan Vapaavuori says of the 650,000 residents.

The concert was part of the Virtual Helsinki initiative that recreates experiences of the city’s most famous landmarks through virtual reality.

NEW DELHI, India — India will extend its lockdown for another two weeks, with relaxations in some areas.

The government will continue stricter measures in places classified ‘red zones,’ such as New Delhi and Mumbai, and ‘orange zones,’ which have some cases. In ‘green zones’ or low risk areas, some movement of people and economic activities will be allowed, India’s home ministry says.

Officials say the nation has bolstered its domestic production for key medical supplies like ventilators, oxygen and personal protective equipment.

The government says it currently had almost 20,000 ventilators and 43.8 million oxygen cylinders. But with an expected surge in cases following the relaxation of some lockdown measures, officials estimated a demand of 75,000 ventilators and in the coming weeks. Of this, 60,000 will be manufactured in India.

India’s low testing rates is partly due to the unavailability of testing kits. The government estimates needing 3.5 million standard kits for its 1.3 billion people, who have been under a five-week lockdown.

LONDON – Officials say the mortality rate among poorer people with the coronavirus is twice that of the richest in Britain.

Carl Heneghan, professor of evidence-based medicine at Oxford University, said “these areas also suffer from poor housing, nutrition and higher incidence of health conditions that might act to lower immunity.”

Helen Barnard, acting director of anti-poverty charity the Joseph Rowntree Foundation, says poorer people are less likely to have jobs where they can work from home. She says, “this means they may have to face a very significant drop in income or keep going to work, facing greater risks of catching the virus.”

ROME — Many Italian businesses are reeling under losses dealt by the stay-at-home lockdown this May Day.

Some entrepreneurs put mannequins in poses as if they were sipping coffee at counters.

In towns from north to south, many small business owners stood at a safe distance from each other on the sidewalk or in town squares, wearing black masks and holding placards in front of their restaurants to highlight their economic troubles.

In southern Sicily, some owners packed food to bring to those in even tougher straits.

Italy’s eight-week lockdown leaves many families struggling to pay for necessities. On Monday, restaurants and cafes can start offering takeout but no meals on the premises. Nonessential shops will be allowed to open on May 18, if Italy’s rate of contagion doesn’t rise.

TOKYO — Robot staff debuted at a Tokyo hotel for mild coronavirus patients under a plan to free up beds at overburdened hospitals.

Pepper, a popular semi-humanoid talking robot, greeted Tokyo Gov. Yuriko Koike as she walked into a downtown hotel during Friday’s demonstration. Pepper, wearing a white surgical mask, also reminds patients to check their daily temperature and encourages them to rest.

Doctors and nurses are staffed at the hotels. Guest patients can also access health management applications on computers and tablets to record their body temperatures and symptoms. “Whiz” a cleaner robot, operates in hotel lobbies where patients come to pick up meals to reduce infection risks.

The robots, made by SoftBank Robotics, will be deployed at other hotels rented by Tokyo’s government for patients with no or mild symptoms. So far, Tokyo has secured five hotels with 1,500 to 2,800 rooms.

Japan has 14,281 confirmed cases and 432 deaths, according to the health ministry tally.

BANGKOK — Domestic airlines in Thailand are resuming some regular flights, with half the country’s provincial airports reopened.

Department of Airports Director-General Tawee Kaysisam-ang says 14 of the 28 airports his agency oversees reopened Friday. Domestic flights also resumed at airports that serve as international gateways, including Bangkok’s Suvarnabhumi and Don Mueang airports and Chiang Mai Airport in the north.

All airports must implement social distancing measures. Passengers should wear masks and stand in designated spots to check in. The airlines are supposed to sell only one in three of each flight’s seats to keep passengers apart.

A spokesman for Don Mueang Airport says it would service 150 arrivals and departures carrying 3,000-4,000 passengers Friday, compared to the four or five flights a day in recent weeks.

VALLETTA, Malta — Malta’s government has announced the relaxation of some coronavirus restrictions.

Bars and restaurants will remain shuttered. The government says it will review its position in three weeks.

Malta’s airport and ports will remain closed indefinitely. People in groups of more than four persons in public places will be fined.

TOKYO — Japanese Prime Minister Shinzo Abe says the coronavirus state of emergency to end next week will be extended about a month.

Abe, citing a report by experts on a government task force, says Japanese medical systems are still under severe pressure with the number of confirmed cases far exceeding 10,000. Japan has averted the explosive of infections in many other countries and the spread of the infections has somewhat slowed under the ongoing state of emergency.

Abe says, “We still need you to continue cooperating, and that’s the experts’ view.” He says he instructed Economy Minister Yasutoshi Nishimura, who is tasked with the coronavirus measures, to extend the measures “for about a month.” Abe says he will announce details Monday.

Shigeru Omi, deputy chair of the panel and a public health expert formerly with the World Health Organization, says the infections have not slowed as much as experts had hoped. He says, “If the resurgence occurs, medical systems will be quickly overburdened.”

Japan has more than 14,000 cases and over 400 deaths, according to the health ministry. However, experts say there could be several times more patients.

Previous : Puerto Rico to partially reopen despite coronavirus concerns
Next : US weighs restricting travel from Brazil amid fears it may be next coronavirus hot spot