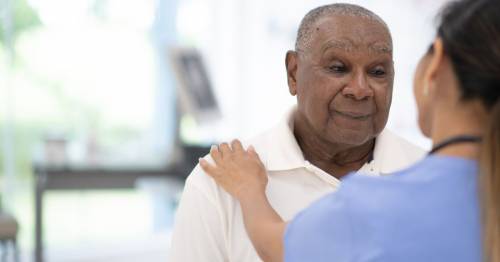 One in four black men will be diagnosed with prostate cancer compared to an eighth of males from other ethnicities.

But despite the stark statistics, research has found just under a quarter (24 per cent) of black men are aware of the higher risks.

Prostate cancer is the most commonly diagnosed male cancer in the UK, yet over three quarters (76 per cent) are unaware of all the potential signs – with a quarter (25 per cent) completely unaware of any symptoms.

However, the research conducted by leading private cancer care provider GenesisCare and charity Prostate Cancer Research found those who speak about cancer with friends or family are four times as likely to recognise the symptoms (31 per cent versus eight per cent).

They are also twice as likely to receive an early cancer diagnosis (83 per cent vs 43 per cent).

However, when it comes to prostate cancer, these conversations aren’t easy – with a fifth (21 per cent) feeling too uncomfortable to talk to their family or friends about it.

These discussions are more important than ever as the pandemic has further impacted the number of men visiting their GP, in particular, black men.

A third of black respondents were deterred from getting potential symptoms checked for fear of contracting Coronavirus while visiting medical facilities (32 per cent, versus nine per cent of white men).

The research of 2,000 British men contained data from 1,182 white men, 502 black men and 208 Asian men, and aims to raise awareness of the importance of discussing cancer among men.

Dr Philip Camilleri, Consultant Clinical Oncologist at GenesisCare, said: “The more we invest in understanding and raising awareness of this issue, the better the patient outcomes will be in the future.

“It’s not surprising to me that people aren’t aware of the symptoms of prostate cancer – we hope this will help men to identify what they are so they can seek help from a medical professional if they spot any telling signs.”

The research revealed nearly a third (30 per cent) of black men who struggle to talk about prostate problems would be more comfortable opening up if they heard others discussing it more often.

Other things which those surveyed via OnePoll stated would help spark a conversation among black men include guidance from a medical professional on how to talk about it (38 per cent) and seeing other people talk about it more often on TV (27 per cent).

Cancer sufferers have been raising awareness of prostate cancer in black men.

Naomi Elster at Prostate Cancer Research added: “This research highlights how few people are aware of the higher risk that comes with black ethnicity.

“This is not a problem for only the black community to solve.

“Much more research needs to be done to understand why black men are at higher risk, how they can be treated most effectively and what the real-life impacts of cancer are in that community.

“This year, we will specifically invest in research which aims to improve the situation for black men.”

Linford Christie OBE, Olympian, legendary sprinter and prostate cancer campaigner, added: “Most people don’t want to think about getting older and the health implications that it brings – but being aware of the symptoms of something like prostate cancer so you can act quickly could save a life.

“I want to normalise conversations around prostate cancer.

“We’ve seen from the research the positive impact that these conversations can have when it comes to recognising symptoms and getting tested as soon as possible.”

Cancer sufferers have been raising awareness of prostate cancer in black men in a video with Linford Christie OBE. View it on YouTube here

Previous : ‘Post-Apocalyptic Prehistoric World’: Study Reveals Disaster That Occurred After Megalake Dried Up
Next : Siblings who killed sleeping football fan by ‘force-feeding’ him kebab are jailed